Composer of the WeekWolfgang Amadeus Mozart 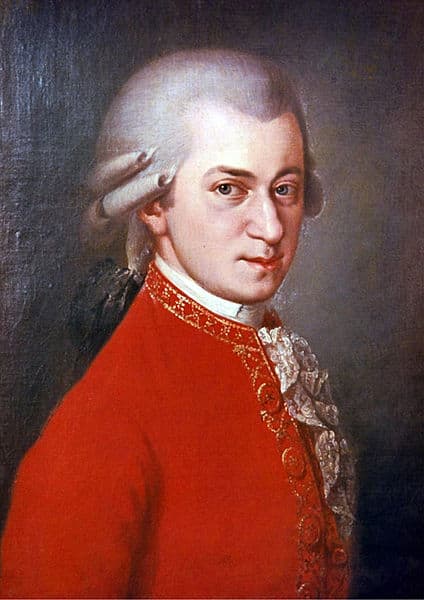 Happy Birthday to child prodigy, opera genius, and Classical composer-du-jour, Wolfgang Amadeus Mozart! Mozart composed more than 600 works in his 30 active years (he didn’t start composing until the age of 5.) This number includes 68 symphonic works, 54 concertos, 18 masses, and 23 operas! Mozart was, by all accounts, an extremely prolific composer.

Mozart started his musical career as a performer, touring Europe with his older sister as a pair of child prodigies. By age 17 he has accepted a job as a court musician in Salzburg. He was never very happy in Salzburg, so when the opportunity came up to move to Vienna, Mozart moved quickly.

Mozart is considered to be one of the two top composers of the Classical era. The other was Joseph Haydn, and they were friends who would sometimes play in string quartets together. Mozart also dedicated quite a few of his quartet compositions to Haydn.

Mozart was popular as both a symphonic composer and an opera composer. Although he was a fairly popular opera composer throughout his life, his opera career really bloomed the five years prior to his life. During that time he composed the operas that are most performed today: The Marriage of Figaro, Don Giovanni, Cosi fan tutte, and The Magic Flute.

There are many misconceptions about Mozart’s death – primarily that he died in poverty and obscurity. The Mozarts were quite poor at the time of his death, but that did not have a huge impact on how he was buried. It was the custom at that time in Vienna to be buried in a common grave and for very few people to attend the funeral. After his death, there were memorial concerts in Vienna and Prague that were highly attended. There was a resurgence in his music, and four biographies of Mozart were written within 20 years of his death.

Anyway, enough about his death, let’s hear some of his music. This is a movement of his earliest work that is commonly performed. The “Alleluja” from Exsultate Jubilate, written when Mozart was 17.

Here’s the beginning of his Symphony No. 25, written during the same period.

And a beautiful moment from one of his operas, The Marriage of Figaro.