Composer of the Week – Camille Saint-Saëns 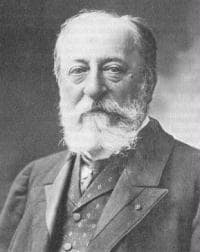 Happy birthday to French composer Camille Saint-Saëns, who was born October 9, 1835.
Saint-Saëns was definitely one of those musical prodigies you hear about. He started piano lessons when he was about 2 years old, and by the time he was four, had already started composing. His first concert appearance was at age five, and his first recital was when he was ten. He composed his first symphony at age sixteen.
Saint-Saëns wasn’t just about music, however. He also had a great interest in science, math, philosophy, and astronomy. He wrote many articles on ancient instruments, acoustics, and the occult. He also wrote a volume of philosophy, a collection of poetry, and a play. Quite the well-rounded intellectual, wasn’t he?
You probably know this well-known cello solo of his, The Swan. (Performed by Misha Maisky and narrated by James Bond):

But how about his awesome cello concerto (Performed by Jacqueline Du Pre, conducted by Daniel Barenboim with the New Philharmonia Orchestra. This is the version I listened to all the time as a kid):

Saint-Saëns played the organ at many churches in Paris, and it’s this experience that led to his most well-known Symphony- Symphony No. 3, referred to as the “Organ Symphony.” (Fourth movement with Olivier Latry on organ, Myung-Whun Chung conducting the Orchestre Philharmonique de Radio France)