Composer of the Week – Scott Joplin 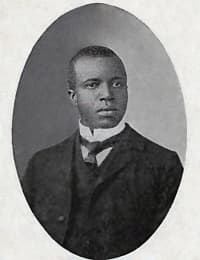 Of course you’ve heard of Scott Joplin! Everyone knows his two most famous pieces: Maple Leaf Rag and The Entertainer.

Joplin was the self-proclaimed King of Ragtime, a musical form popular in America around the turn of the 20th century. Ragtime was a pairing of European classical music songs with the syncopation of African rhythms.
Scott Joplin was born in 1867 or 1868 in Texas. His mother encouraged his musical education, and he started by learning the banjo and violin. Later he learned to play the piano. There were not many opportunities for black pianists at the time, so Joplin made his early living performing at church gatherings, community dances, and in brothels. By the time he was 30, he had landed work at men’s social clubs, and had started to compose and publish his piano works.
Joplin’s piece, Maple Leaf Rag, was published in 1899, and had sold 75,000 copies within six months. Imagine selling 300,000 copies of a single today, without radio, television, or the internet. Pretty impressive.
Joplin tried his hand at opera twice, but both operas did not perform well. His first opera, A Guest of Honor, he took on tour, but a member of the company stole the money from the box office, and the tour ended abruptly. He put together a small piano/vocal performance of his second opera, Treemonisha, in an attempt to get it funded, but it never got off the ground. Fortunately, the score survived, and it was finally stage in 1972.
Here’s another of his piano works, Elite Syncopations: