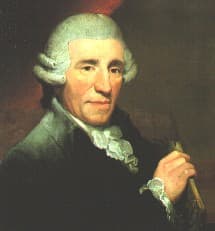 Happy Birthday (Thursday) to beloved composer, “Papa” Haydn! He was groundbreaking in the Classical period for his contributions to the form of the symphony, the string quartet, the piano trio, and sonata-allegro form. Haydn was a busy, busy composer. He spent most of his career working for the Esterhazy family, which allowed him to develop his skills and musical voice. He was a friend of Mozart, and even taught Beethoven for a brief period.
Haydn’s style evolved from a very emotional style (his Sturm und Drang era) to a lighter, comical style, and then finally to his “popular style” which contained a lot of folk music and folk music references. Much of Haydn’s music was designed to entertain his elite patrons, and he put a lot of humor in his music. A great example is his “Surprise” Symphony, but he also liked to throw false endings in his pieces to trick people. He was reportedly quite the practical joker.
There is a rather morbid story that Haydn’s head was stolen after his death. This story is absolutely true. His head was removed from his grave after burial for the study of phrenology. After his burial, his patron, Prince Esterhazy, wanted to move Haydn’s grave to a different cemetery, and it was then that they found out Haydn’s skull was missing. They tracked down the culprits, but they gave him a different skull to bury, keeping Haydn’s to themselves, passing it down from generation to generation. It was only in the 1950’s that Haydn’s real skull was reunited with his body in the tomb, but the replacement skull was never removed. So Haydn’s tomb contains two skulls.
Anyway, back to the music. Here are some Haydn favorites:
“Surprise” Symphony No. 94, Second Movement