Composer of the Week – Carlos Salzedo 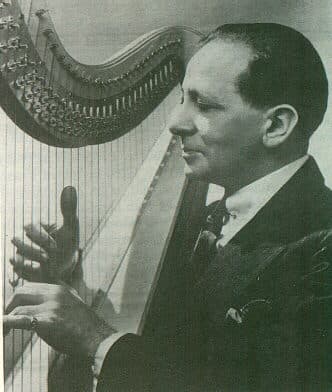 Happy Birthday to French composer and harpist extraordinaire Carlos Salzedo.
Salzedo’s parents were both musical, and his mother was a court pianist to the queen of Spain. Salzedo began playing piano at a very young age and, after playing for the queen of Spain at age three, was dubbed her “little Mozart”. He took up the harp later in his childhood, upon his father’s insistence that he should learn a second instrument. Salzedo had been born two months premature, so he wasn’t considered strong enough to play a wind instrument.
During World War I, Salzedo was drafted into the French Army, and served as head cook for his infantry unit. He was also able to organize some of the soldiers of his unit into a group that sang in hospitals for injured soldiers.
Salzedo was a very influential harpist, both in terms of technique, and repertoire for the harp. He was a very popular teacher, and was composing and teaching well into his 70’s. He spent the second half of his life in America, and died in 1961 in Maine.
Suite of Dances