Composer of the Week – Arnold Schoenberg 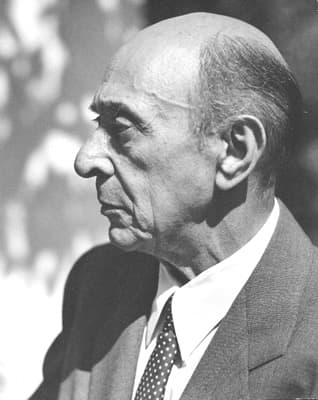 Happy birthday to Austrian composer Arnold Schoenberg, who was born yesterday in 1874. Schoenberg was an incredibly important and influential composer and music theorist who experimented with atonality and invented the twelve-tone music technique (serialism).*
Schoenberg was born in Austria, but later moved to Berlin, where he lived until the 1930’s when Hitler and the Nazi party rose to power. After a vacation to France he learned it wouldn’t be safe to return to Germany, and came to the United States. He settled in Los Angeles, and lived there until his death in 1951. An interesting story is that Igor Stravinsky also emigrated to the U.S. around the same time and also settled in Hollywood, just a few blocks from Schoenberg himself. The two were musical rivals and they never spoke while living so close to one another. Indeed, musicians often had to choose between the camps sort of similar to the great musical divide in the 19th Century between Brahms and Wagner. It wasn’t until Schoenberg’s death in 1951 that Stravinsky finally began to experiment with serialism.
Schoenberg developed what is now the twelve-tone technique, a way of using all the 12 notes of the chromatic scale in a way that none has more or less importance than another, and avoids putting music in a specific key (see a more detailed definition below). He was also an influential composition teacher and some of his students were Alban Berg and Anton Webern. Together, the three form the Second Viennese School. This is a reference to the so-called First Viennese School comprised of the great German and Austrian composers of the 18th and 19th centuries (think Mozart, Beethoven, Brahms, Schubert, etc.). Of course, those composers weren’t exactly a solidified school of musical thought, but we suppose it made Schoenberg, Berg, and Webern happy to lump themselves with those luminaries. His American students include Lou Harrison, Rogers Sessions, and John Cage. John Cage is the infamous (or famous, depending on your view!) composer of 4’33” and frequently spoke about the importance of his teacher Schoenberg upon his musical voice. The truth, however, is that — at best — Cage only audited a class or two from Schoenberg!
Here are two of my favorite Schoenberg pieces. First, Verklärte Nacht – one of his earliest works.

and second, Gurre-Lieder, another early work, right before he transitioned into twelve-tone compositions.

*twelve-tone or serial music attempts to equalize the twelve notes of the chromatic scale that are in an octave. In tonal music, one note is prioritized as the key or home page. In serial music, all twelve notes are equal. Hence, Schoenberg often referred to it as the, “emancipation of dissonance.” The twelve notes are usually arrange in a row and are manipulated by transposing them up a note or two, arranging them backwards (retrograde), or even flipping them inside out (inversion), among other options.