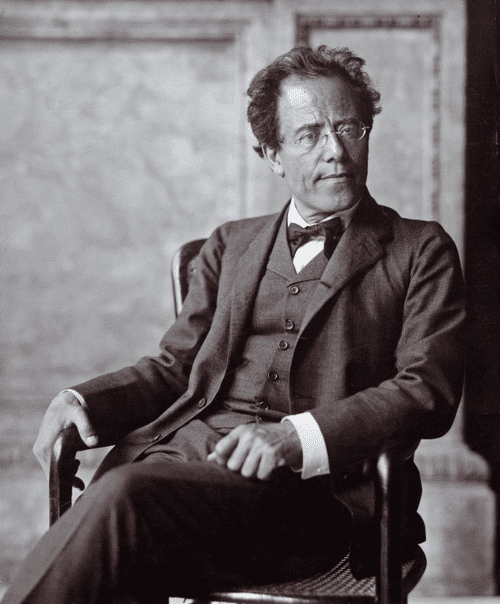 The most easily recognizable characteristic of Mahler’s sound involves his juxtaposition of radically contrasting melodies, emotions, and styles. At times the composer draws upon folk traditions—of Germany, Hungary, and Slovenia, as well as the Czech Republic—and at others, he suggests the Viennese practice of Beethoven, Schubert, and even Brahms. Alongside these, Mahler will place fanfares, pastoral idylls, chorales, marches or any other number of radically divergent ideas. Many of these materials derive from popular genres, and this resulted in accusations of “vulgarity” during the composer’s lifetime. After a 1910 session with Sigmund Freud, Mahler related his propensity to use music taken from the popular sphere—especially when placed within a tragic context—to a childhood experience when, following a particularly unpleasant disagreement between his parents, he heard a barrel organ playing the popular song Ach, du lieber Augustin (Oh, My Dear Augustine) while he was still sorting through his turbulent emotions.

In addition to the evocation of standard genres, Mahler’s symphonies often allude to or quote—both vocally and instrumentally—his own lieder. He also cites the works of other high-art composers, though he curtailed his tendency to use quotations after 1900. Before this point, however, Mahler justified his incorporation of them to the violinist and dilettante author Natalie Bauer-Lechner as follows: “. . . composing is like playing with bricks, continually making new buildings from the same old stones.”

The associations Mahler’s references bring to his symphonies, especially when combined with the implications of the poetry presented in their numerous vocal movements, create a complicated network of “meanings” (assuming one believes that music possesses meaning beyond its sonic properties), and this “content” has a definite philosophical bent. The withdrawn programs for the early symphonies further complicate things, since Mahler’s programmatic subjects do not necessarily match those intimated by the allusions embedded in the music. Nevertheless, a common thread runs through many of Mahler’s emotional trajectories. As he said to Bauer-Lechner on 16 March 1896, art should “liberat[e] from and . . . rise above sorrow.”

The expanded scope of Mahler’s symphonies and orchestral songs emerges as another distinctive trait of the composer’s writing. His First and Fourth Symphonies share the distinction of lasting under an hour (the only two to do so), while his Third emerges as not only Mahler’s longest, but the lengthiest symphony in the standard orchestral repertoire. Likewise, the Mahlerian ensemble typically requires the addition of supplemental performers—especially vocalists, as well as extra brass (sometimes offstage) and woodwind players—to accommodate his specified instrumentation. The Eighth Symphony has received the nickname “The Symphony of a Thousand” due to the excessively large number of performers involved: when the O.C. Tanner Gift of Music series programmed this work as a joint effort between the Utah Symphony Orchestra and Mormon Tabernacle Choir in 2002, approximately 930 musicians participated.

Despite their varying—and extended—length, Mahler’s symphonies display a variety of movement sequences. Only the First, Fourth, Sixth, and Ninth Symphonies total the customary number of four movements, though none of them follow the fast-slow-dance-fast sequence of tempos established in the eighteenth century. As for the other symphonies, the Second, Fifth, Seventh, and Tenth all reach five movements, while the Eighth possesses only two. Both the Third and Das Lied von der Erde (The Song of the Earth), which Mahler labeled “a symphony for tenor, contralto and orchestra”: each have six.

Mahler’s harmonic style conforms to post-Wagnerian practice, with the composer making use of a great deal of dissonance and chromaticism. His symphonies also demonstrate the dissolution of the major-minor system, since not all of his works end in the same keys in which they begin. For example, the Fifth Symphony opens in C-sharp minor, but closes in D major; in contrast, Mahler’s Ninth Symphony moves in the opposite direction, from D major to D-flat major.

The composer predominantly used the intervals of fourths and fifths in his melodies, though triadic lines still occur frequently. His music employs traditional forms stemming from eighteenth-century custom, but his expanded scope necessitates modification and unique interpretation of these classical schemes. Mahler also strove, at least in his symphonies, for musical coherence across his multi-movement structures. He therefore frequently crafted a network of themes in each movement of a single piece, and these melodies relate not only to one another, but to those of the other movements of the same work.

Above all, Mahler sought to create art of an intensely personal nature. All elements of his compositional style, as well as his nearly exclusive concentration on the genres of symphony and song, produce an idiosyncratic voice particular to this composer. Somewhere between July and August of 1893—and during the composition of the Second Symphony—Malher told Bauer-Lechner, “My two symphonies treat exhaustively my entire life; it is experience and suffering that I have written down with my lifeblood. Truth and poetry in music; and if someone understands how to read well, my life must in fact appear transparent to him in them. So strongly are creation and experience interwoven that, if henceforth my life should flow calmly like through a meadow—I think I would no longer be able to create anything proper.”

Bettie Jo Basinger has been teaching at the University of Utah since 2007. She has both a Master’s Degree and PhD in Musicology—as well as a Bachelor’s in French Horn Performance—from UCLA. Although her research interests include the entire symphonic repertoire, Dr. Basinger specializes in the orchestral program music of the nineteenth century, particularly the symphonic poems of Franz Liszt.