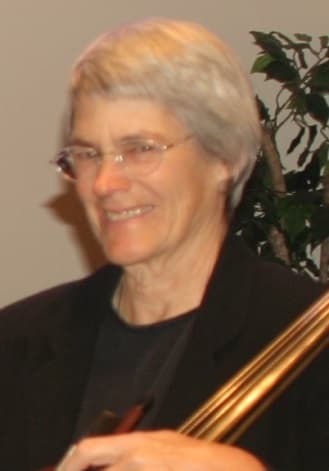 There’s something about being on the same page about what you’re doing and being excited about it that helps you get through the physical stress. And so my experience with Maestro Abravanel was that people very rarely got injuries or got sick because I feel there was so much passion and inspiration and love in what we were doing. That tends to keep you healthy, you know, and it was quite extraordinary.

Mahler and the Children

Music is so emotional that a person can’t not be touched by it. And children are very open to the emotional content of music. From my point of view, the more powerful, emotional content of something, the easier it is to touch a child with that and awaken a certain love for the music in them. Yes, we played a lot of Mahler in school concerts and, again, every concert was the most important and when we were playing those Mahler concerts, you know, the passion from everyone in the orchestra was pretty extreme, pretty wonderful. You couldn’t ever get bored, you know, or kind of sit on your laurels or anything like that. The focus was just way too intense for that.

On Playing in the Tabernacle

There was something to be said for playing in the Tabernacle where there might be six thousand people squeezed in or more, and sometimes it’s a very different feeling when there’s not enough space for people to be in their private world in their seat, where you have to become more of a unified group in a way. And there were so many occasions in the Tabernacle where it was a very exciting thing because six thousand people or more all felt the same positive thing. And it’s very hard to find that in the world today. You know, concerts are still probably the best opportunity. I mean, if you go to a sports game you’ve got the opposing sides and so you don’t have that feeling of unanimity in the support of something beautiful and in awe of a great artist.

The Importance of the Audience

You can’t have an arrogant attitude towards the audience and I think that happens way too much. Every audience has to be the most important part of every concert, and it was with Abravanel. That’s where I really learned that this is the most important concert and that’s why I’m where I live now, because of the children’s concert we played in Loa, Utah in 1972. The only place big enough was the Mormon church there. So we were at one end of the gymnasium that‘s on the bottom floor and all the little kids came in from kindergarten on up, carrying their little chairs around and they were sitting six feet away from me. And the gym fills up and all the school kids are there, then adults start filing in and there are over nine hundred people in the hall. And at that time the population of Loa was about five hundred, so all the school kids in the county were there and a whole lot of adults. And again it was one of those concerts to which Abravanel brought every bit of passion and love to it that was possible, so we played that way too. And to watch the faces of these folks who hadn’t heard a live symphony before, it was pretty amazing.

Abravanel had such an incredible sense of timing; that’s one of the things I think that was most outstanding, one of his strongest points as a conductor. It’s how you go from this section into the next section, the flow of it, the timing of it, you wait just a moment, how long is that pause before you fall into the next phrase. It gives the illusion of movement beyond what most conductors can create.

A knife through the heart – Mahler’s First Symphony

The last movement in [Mahler’s] First Symphony starts with incredible sound and fury. Shortly into the movement the cellos have a middle C, it’s an eighth note, it’s marked triple forte, so [you have to give] all the power you can possibly give to this one short, short note that lasts less than a quarter of a second, probably. And you’re probably covered up by brass and percussion, but when we first came to that in the first rehearsal, I remember Abravanel stopping and turning to the cello section and saying, “That note is a knife through the heart.” He wanted us to play it that way, so I actually drew a heart around the note with a little sketch of a knife through it. And for years thereafter, whenever we would play the Mahler first symphony and this old music was up there, I’d see the heart and the knife through it and so would my colleagues, and we would play it that way because we all remembered. 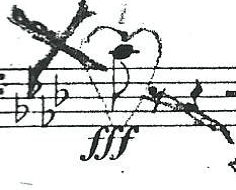 A knife through the heart

He had a wonderful way of knowing when to tell a little story or give a metaphor, and that’s way more effective in getting the ultimate musical result you want than stopping and rehearsing and saying, “That’s too loud, it needs to be shorter, it needs to be longer, softer.” No, tell a story and invoke the mood and then people will know how to play.

Abravanel’s love for the music, the audience, and the musicians

There just has to be so much love and tenderness in the music and he brought that out more than anyone I’ve ever played with. The love that is the backdrop for all of music was always there with him. It would be like the blank canvas, the white canvas you’re going to paint. You can paint any color on it, but if there’s no canvas it doesn’t mean anything. And so I feel like the love was the blank canvas on which he made the music. And that love was for the music, it was for the audience, it was for the musicians. You felt that so strongly when you played with him.

Highlights from an oral history interview conducted on September 11, 2014 in the Abravanel Studio of the McKay Music Library.