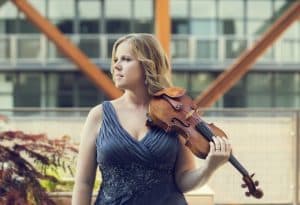 If you’re anything like us, you’re probably addicted to finding new music. To help you satisfy your thirst for great music, this series of articles is dedicated to the people who know music best: the musicians of our orchestra. Keep reading to learn more and listen to concertmaster Madeline Adkins’ curated playlist inspired by the Korngold Violin Concerto which she will perform on May 25-26, 2018.

My Spotify playlist is an intro to the Korngold Violin Concerto and also a few of my personal influences! Firstly, I’ve included a few other works by Korngold himself. The very first track from the Prince and the Pauper prominently features in the violin concerto—you will be sure to recognize it! I include the main titles from Captain Blood and Robin Hood, for which Korngold won an Oscar. Also, music from his composition The Snowman, his Much Ado About Nothing suite, and a Suite for 2 Violins, Cello, and Piano Left Hand.

Korngold’s early influences included Zemlinsky, Wagner, and Mahler, but he came into the public consciousness mainly through his film scores. He came to Hollywood in the 30’s to escape wartime Europe and wrote a number of notable film scores including Robin Hood and Captain Blood. He returned to “art music” after the war, at which time his violin concerto was premiered by Jascha Heifetz in 1947.

I included a number of other prominent classical pieces from that time that have been incorporated in movies, such as Ravel’s Piano Concerto, Shostakovich’s Jazz Suite No. 2, and the Adagietto from Mahler’s Symphony No. 5. You’ll also hear a violin concerto by Louis Gruenberg, another film composer whose concerto was also premiered by Jascha Heifetz, as well as a Bernard Herrmann classic from Taxi Driver.

The last five tracks are the getting-to-know-me section. As far as my personal influences, my dad was a prominent historical performance scholar, so I grew up well versed in Baroque music. Included here: Rachel Podger’s sublime interpretation of Biber’s Passacaglia.

I grew up in a jazz town (Denton, Texas) so Frank Sinatra is non-negotiable.  Before concerts, I love to get energized with my disco playlist… hence the Parliament.

One of my earlier classical influences was my first six years in the Baltimore Symphony when Yuri Temirkanov was the music director. I include a quintessential YT track of Prokofiev (also, not insignificantly, one of my two favorite composers!)

Finally, a track from my first commercial release my other favorite composer: Mendelssohn. This is an unpublished sonata movement I found in a Berlin archive!

Enjoy and I hope to see you at Season Finale: Rachmaninoff’s Symphony No. 2 on May 25th and 26th!

Bernadette Peters with the Utah Symphony