“My first violin wasn’t even a violin. It was a margarine box that was wrapped in mailing paper with a ruler for the fingerboard and floss for the strings” describes Kathryn Eberle, Associate Concertmaster of the Utah Symphony, recalling her first lesson on her third birthday.  Music and competitions were always a part of Kathryn’s life.  She started competing from a very young age, and as she grew older, she participated at the national and even international levels.  At the age of 11, she attended a summer music camp where she won the concerto competition resulting in a performance of Mozart’s Violin Concerto No. 3 in G Major with their orchestra. It was a memorable experience for Kathryn and she  recalls “thinking at that point that music was something that I definitely wanted to pursue professionally.”  For her, competitions were never about the prizes or rewards. (Though one competition did indirectly result in her soloing with the Los Angeles Philharmonic!) Competitions are “things that one does to better ones playing and I think that’s the attitude you have to have going into them. For me it was really important to do competitions because they were these great goals to work towards. Each competition was just the next step in refining and tweaking my playing.” 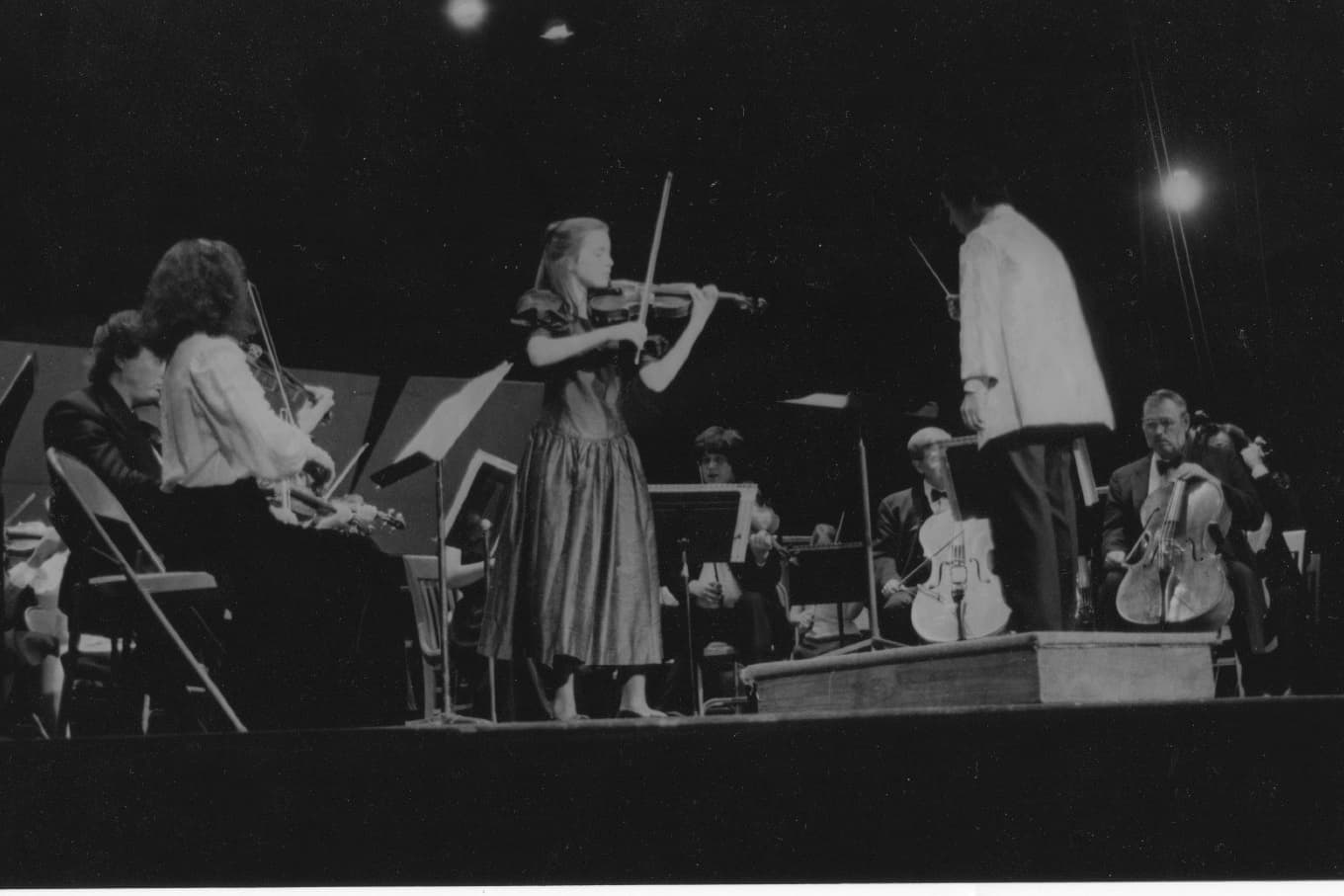 Growing up, she studied with Cornelia Heard, faculty at the Blair School of Music at Vanderbilt University. “She is a very dear friend and just one of the most special people I know.” Kathryn describes her high school years as “homeschooling that was not homeschooling.”  Mondays were her day off from school so she could dedicate herself to practicing. Tuesday through Friday she attended school with “lots of other kids” and was let out early to practice.  “Being able to practice those extra couple of hours while most kids were still in school every afternoon was huge because those years, and your first couple of years in college, are the years to get your practicing in. Those are the years that you’re refining your technique and becoming a more sophisticated and mature musician.” Reflecting back on her childhood, Kathryn expressed her gratitude for being able to go to school and interact with kids her own age while still having the flexibility to practice as much as she needed everyday. “I think that was very healthy and important.”

She attended University of Southern California studying with Robert Lipsett whom she had met as a 14-year-old attending Encore School for Strings, a summer music camp run by the Cleveland Institute of Music in Hudson, Ohio. “Robert Lipsett asked my mom after my first summer studying with him if we could pick up and move to Los Angeles and her answer was, ‘No, we have a life in Nashville, we will stay in Nashville.’” But Kathryn kept in touch with Lipsett and flew to LA a few times during her last couple of years in high school for lessons. “Going to USC was just a very natural progression for me because he was on the faculty there and I knew I wanted to study with him…It was wonderful because I felt like I got top notch conservatory training but at the same time I was in an environment where I could explore lots of different classes, some non-music related. I loved every minute at USC.” After graduation, Kathryn spent three years earning a Professional Studies Certificate from the Colburn School in Los Angeles, continuing her studies with Lipsett. “I was just focused there, studying and practicing – a lot of practicing.” 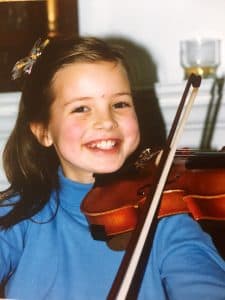 Kathryn as a young musician

Then she headed east and fulfilled her dream of being a musician living in New York City and earned a master’s degree from the Juilliard School studying with Sylvia Rosenberg.  “I loved Juilliard and all the opportunities it offered.”  Up until this time Kathryn envisioned a career combining chamber music, solo playing, and teaching but “Juilliard was where I really decided that I wanted to be a concertmaster.” Kathryn frequented the concertmaster chair of the Juilliard Orchestra, including a tour of China “which was really fun and pretty incredible.” Here she realized that in a “concertmaster situation you have the best of all worlds – you get to explore the incredible orchestral repertoire, have solos and play concertos occasionally, you play lots of chamber music, but you’re also in an environment where you have a home base and you can have a community that you’re a part of and that was very appealing to me.” 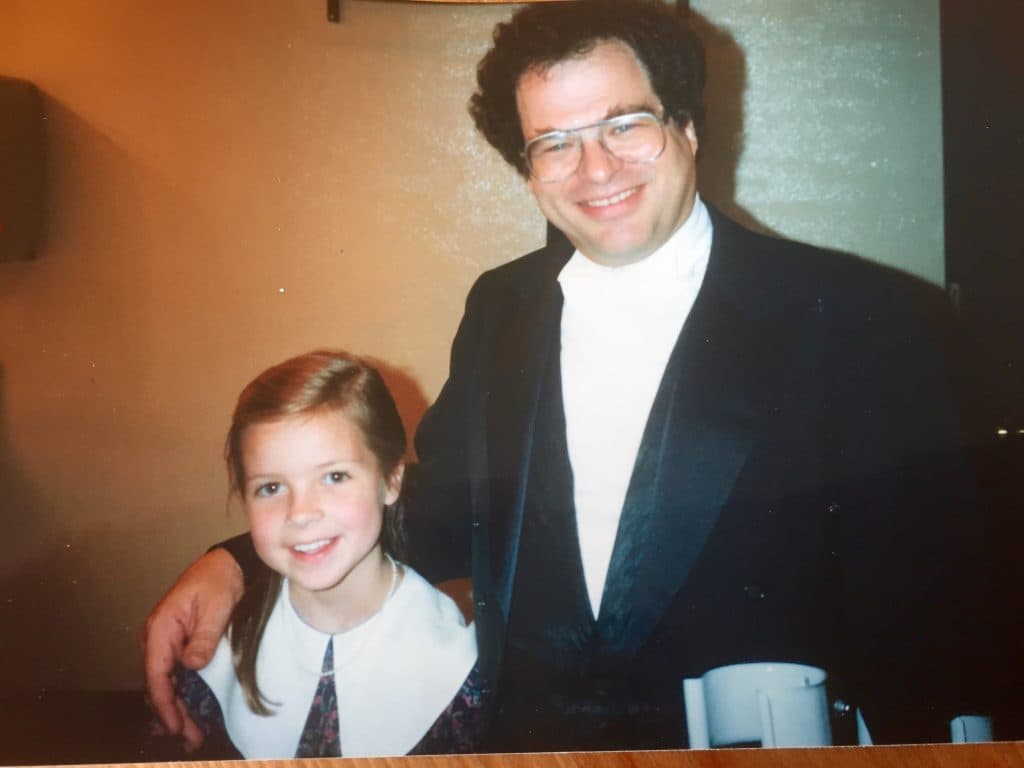 Kathryn won her current position as Associate Concertmaster of the Utah Symphony during her time playing with St. Louis Symphony. “I was incredibly thrilled when I won this job. It was very fortunate that this job worked out for me when it did because it’s been a really wonderful fit.”  She views auditions like most things, to improve you must practice. “Auditions are very different than performing. However, I have always tried to make auditions feel like a very poorly programmed concert.” When it comes down to it, “I feel like playing the violin well is playing the violin well. Being a good musician is being a good musician. And I think often times with excerpts we all have a tendency to overlook those basic things and to treat them like they are sacred rather than just thinking about really basic music ideas and principles. You can apply that to anything that you’re studying, whether it’s the Brahms Violin Concerto, or Brahms Symphony No. 2, or Brahms Violin Sonata, or the Brahms String Quartet. It doesn’t matter. To me, music is music and I think it really is good to just approach it all the same way.”  When asked how many auditions she has taken, her response is to count how many postcards she has. Totaling somewhere around 15, “I would write down on the back of the postcard what I thought I did well and what I thought I could improve so that I could go back and have a record of what happened so I wouldn’t forget.”

Four and a half years later, Kathryn has struck up the balance that she was looking for in her music career. During her time here with Utah Symphony, “I have particularly enjoyed playing all the Beethoven symphonies and getting to work on them in a progression with the same artistic vision, the same conductor, and I’m particularly excited about the Beethoven cycle coming up. It’s going to be cool both as an orchestra member and as an audience member to see that progression in such a short time frame.” The past couple of years Kathryn and Utah Symphony’s Principal Keyboardist, Jason Hardink (artistic director of the Nova Chamber Music Series), have been performing all the Beethoven violin sonatas. “It has been really fascinating for me to see how the symphonies progress and how the sonatas progress and the similarities and differences in an interesting compare and contrast study.” Another favorite Utah Symphony moment was last April when she “felt very fortunate” to have  the opportunity to perform Bernstein’s Serenade on one of their Masterworks concerts.  “So I guess, for me, that encompasses all the things I love doing: I love playing in orchestra, I love playing chamber music, and I love occasionally getting up and soloing.”

The journey in this wonderful career was not always an easy path. When asked if there was a time she ever failed or felt like quitting, Kathryn replied, “I was starting to have those thoughts right before this audition and I remember a friend telling me, ‘Just go take Utah – We’ll talk after that.’” (Needless to say they had a very happy conversation following the audition.) Kathryn persevered and that is her word of advice to up and coming musicians. “Perseverance. If you keep at it and you keep practicing and you keep refining your playing, even after you have a job, you’ll do well.” Perseverance can be turned into not only practice a lot but practicing well and thoughtfully.  Kathryn now reaps the benefits of her many years of hard work and dedication to her studies. “I’m very mindful of how much I have played in a day and mindful of having a balanced life in general. Now I’m pursuing other interests that I just couldn’t do when I was younger…I’m reading more books and learning how to ski.”

Kathryn doesn’t remember a time that music wasn’t a part of her life, and has built a career that encompasses everything she loves about it: orchestra, chamber, soloing, and teaching.  From her margarine box days to the J.B. Vuillaume she currently plays, her progression of successes as a musician boils down to her hard work and perseverance.