The Story of Candide

The Narrator welcomes us to Westphalia and reveals the story’s beginnings: Candide, illegitimate nephew of Baron Thunder-ten-Tronck, shares the castle with the Baron and Baroness, their son Maximilian, and their daughter Cunegonde. Also on hand is Paquette, an attractive servant with an eye for the gents. Though the Baroness snubs him and Maximilian bullies him, Candide and his cohabitants seem to have learned happiness from their teacher and “world’s greatest philosopher” Dr. Pangloss.

Candide is in love with Cunegonde, who invites his advances. But when the Baron learns they have been intimate, he is outraged at the socially inferior Candide and exiles him. Alone, the penniless Candide wanders until he is shanghaied into an army of Bulgars. After a failed attempt to escape, he is with the army as they attack the Baron’s castle, killing all of Candide’s former companions.

Reduced to beggary, Candide gives his last few coins to Dr. Pangloss, who has been brought back to life. They board a ship bound for Lisbon, but before they depart, a nearby volcano and earthquake result in 30,000 deaths; as strangers, Pangloss and Candide are blamed for the disaster and are arrested. Pangloss is hanged; Candide, who is flogged, winds up in Paris, where Cunegonde is alive again and living alternately with a wealthy Jew, Don Issachar, and the city’s Cardinal Archbishop. Candide is reunited with Cunegonde; her companion, the Old Lady, warns them of the impending arrival of Issachar and the Archbishop. Candide inadvertently kills both men, then flees to Cadiz with Cunegonde and the Old Lady. Candide accepts an offer to fight for the Jesuits in Montevideo and retreats with Cunegonde and the Old Lady to the New World. 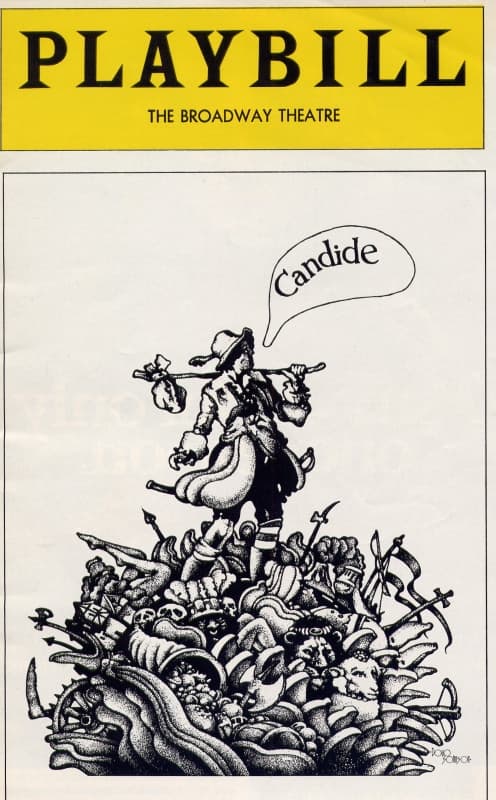 Maximilian and Paquette are now alive again and have found their way to Montevideo, Uruguay, where they reunite, disguised as slave girls. When Candide, Cunegonde, and the Old Lady arrive in Montevideo as well, the Old Lady persuades Cunegonde to marry the governor, who has fallen in love with her. Candide is informed there is a warrant for his death and flees, at the Old Lady’s insistence. Candide comes upon a Jesuit camp where discovers Paquette and Maximilian. Candide tells Maximilian that he intends to marry Cunegonde. Enraged, Maximilian threatens Candide and Candide inadvertently kills him.

Candide and Paquette, lost and starving, journey through the jungle. With the help of an abandoned boat, they find themselves in Eldorado. Life there is opulent and perfect, but without Cunegonde, Candide grows dissatisfied. Eventually he gathers a cargo of gold, gems, and sheep, and he and Paquette depart for the Dutch colony of Surinam, where he learns that pirates have abducted Cunegonde and the Old Lady to Venice.

A Dutch merchant named Vanderdendur cheerfully defrauds Candide by offering him and Paquette a leaky boat with which to rescue Cunegonde. Though it sinks off the pier, Candide still manages to find Cunegonde and the Old Lady. He uses his remaining riches to purchase the freedom of Cunegonde and Maximilian, who is not dead after all. Now reunited, our untraditional family of six – Candide, Cunegonde, Maximilian, Paquette, the Old Lady, and Pangloss – resolve to begin their lives anew on a modest farmstead and “make our garden grow.”