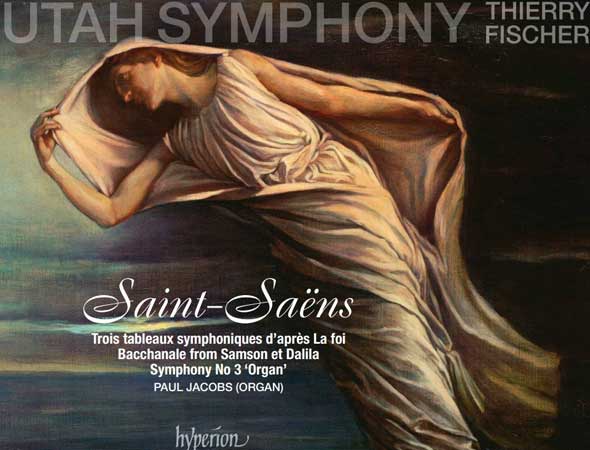 SALT LAKE CITY, Utah (November 28, 2018) — The Utah Symphony under Music Director Thierry Fischer launches a recording cycle of works by French composer Camille Saint-Saëns on Hyperion Records. This three-volume set will be the first complete, commercial recording of the composer’s five symphonies by an American orchestra, as well as the orchestra’s first recording project with the independent British label. Volume 1 is released on Friday, December 28 and comprises Symphony No. 3 in C minor (“Organ”), featuring Paul Jacobs; “Danse Bacchanale” from Act III of the composer’s opera Samson et Dalila; and Trois tableaux symphoniques d’après La foi, based on the composer’s incidental music for a play by Eugène Brieux. Pre-orders are currently available from hyperion-records.co.uk.

The Utah Symphony embarks on these milestone Saint-Saëns recordings having also been the first American orchestra to record the complete Mahler symphonies. Since Maestro Fischer became Music Director in 2009, he has conducted numerous symphonic cycles at Abravanel Hall, and these works by Saint-Saëns were recorded live during the 2017–18 season. Volume 1 was recorded on December 1 and 2, 2017.

Throughout his career, Maestro Fischer has been especially active as a conductor of the French repertoire—from classics by Debussy and Ravel to contemporary works by Pierre Boulez and Tristan Murail. Of his 14 previous recordings on Hyperion, over half are devoted to works by Francophone composers, including Fauré, Françaix, Honegger, d’Indy, Lalo, Martin, Poulenc, and Widor. The Saint-Saëns cycle marks his first recordings of the French repertoire with the Utah Symphony, and following this project, an all-Berlioz album with the orchestra is also planned for release on Hyperion.

“Prior to this Saint-Saëns cycle, the orchestra and I had performed the complete symphonies of composers from Germany, Austria, Denmark, and America, but never from France, so for me this seemed a very natural choice,” said Maestro Fischer, for whom the cycle’s three volumes mark his fourth, fifth, and sixth recordings with the orchestra. “Since Saint-Saëns’s symphonies have rarely been recorded in their entirety—and never by an American orchestra—this is an opportunity for us to continue to our artistic journey, diving into the intensity and energy of the French Romantic spirit!”

In addition to the three numbered symphonies, the cycle includes Saint-Saëns’s Symphony in A major, written when the composer was only 15 years old, and the Symphony in F major (“Urbs Roma”), whose descriptive title—Saint-Saëns’s own—suggests a musical evocation of the Eternal City. Symphony No. 2 and the “Urbs Roma” Symphony are included on Volume 2 alongside Danse macabre, featuring soloist and Utah Symphony concertmaster Madeline Adkins, while Symphony No. 1 and the Symphony in A major are included on Volume 3 alongside The Carnival of the Animals. Volumes 2 and 3 are planned for release later in 2019, dates to be announced.