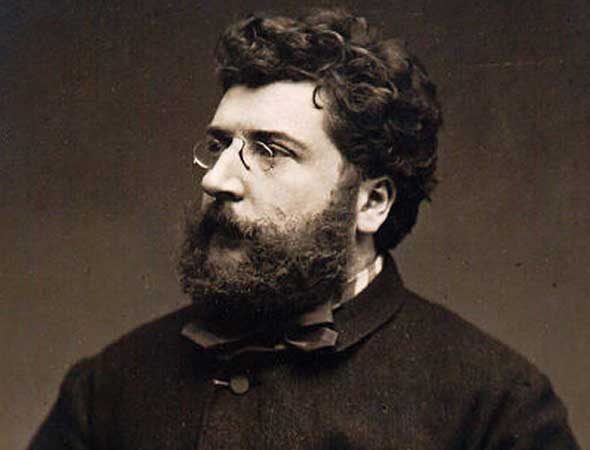 Despite their familiarity, the melodies of Carmen still have the power to grip us and even to shock. Opera experts refer to the “ABC operas” as the ones we know best: Aida, Bohème, and Carmen. Of these, it is Carmen we are most likely to hear in the schoolyard or as elevator music; the one with the best joke lyrics (“toreador-o, don’t spit on the floor-o…”); the one we feel we know even if we’ve never seen it.

Hoffman’s arrangement gives us four of the dances from Carmen: the scene-setting Aragonaise; the Séguedille, in which Carmen tempts the weak-willed Don José to join her at Lillas Pastia’s tavern; the sultry Habanera, in which she compares the elusiveness of love to a bird; and the whirling Danse bohème. We hear the bullfighters march into the bullring in all their splendor, and the boastful toreador Escamillo describing his own heroics. But these movements are shadowed by the Prélude that precedes them. The explosive opening bars of Carmen evoke the visceral excitement of the bull ring in Seville. Almost immediately after we hear those cymbal-accented chords, against a foreboding background of tremolo strings, Carmen’s “fate theme” evokes the fatal destiny that looms ever closer for her. It is the reason why she defies authority and does anything it takes to assert her freedom. This preoccupation with free will versus destiny was a recurrent theme in music of the Late Romantic period. In 1888, when Tchaikovsky was writing his Fifth Symphony, Carmen’s five-note “fate theme” was one of two that inspired the Russian composer in developing his own work on this subject. The other was the famous four-note theme of “fate knocking on the door” in Beethoven’s Symphony No. 5.