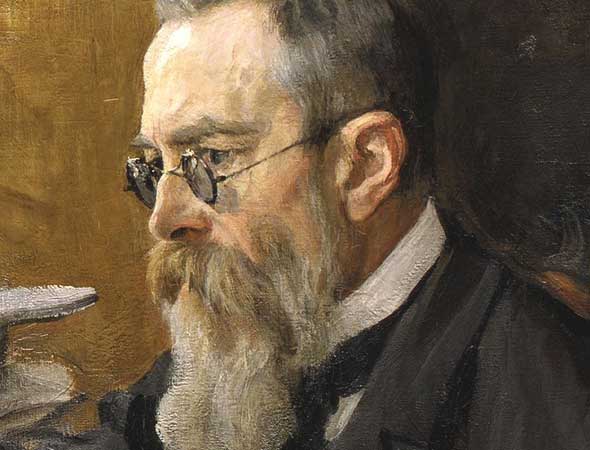 Portrait of Nikolai Rimsky-Korsakov in 1898 by Valentin Serov

Capriccio espagnol is comprised of five brief sections that form two larger divisions: an Alborada (the Spanish term for a morning love song), and a two-part finale.

Beginning with a theme in the horns, the Alborada is a set of five variations during which the sections of the orchestra exchange sparkling solo lines; for example, a clarinet solo from the first variation is taken over by solo violin, while the clarinet co-opts a violin cadenza. By the end of the Alborada, just about every section of the orchestra has been showcased in exacting, highly exposed play.

The second section begins with a Scene and Gypsy Song, a sequence of five cadenzas to balance the five variations in the Alborada. This is followed by the dramatic Fandango of the Asturias (a region of Spain) that integrates themes already heard, braiding them into a finale of fevered intensity.

It’s not necessary to follow this complex architecture to hear the unity it provides. Most of all, the Capriccio is a blood-stirring suite full of color, texture, and drama that confirmed Rimsky’s strengths to his contemporary audiences, as it does to us today. Upon reviewing the score, Tchaikovsky wrote to Rimsky that “your [Capriccio espagnol] is a colossal masterpiece of instrumentation, and you may regard yourself as the greatest master of the present day.”