Grammy-nominated Chinese-American composer Zhou Tian seeks inspiration from different cultures and strives to mix them seamlessly into a musically satisfying combination for performers and audience alike. His music — described as “absolutely beautiful,” “utterly satisfying” (Fanfare), and “a prime example of 21st-century global multiculturalism” (Broad Street Review) — has been performed by leading orchestras and performers in the United States and abroad, including the Pittsburgh Symphony, Hong Kong Philharmonic, and pianist Yuja Wang. His Concerto for Orchestra—commissioned and recorded by the Cincinnati Symphony and Music Director Louis Langrée—earned him a GRAMMY Award nomination for Best Contemporary Classical Composition. Born in 1981, Zhou came of age in a new China marked by economic reforms, and was in the United States by his 20th birthday. Trained at the Curtis Institute of Music, Juilliard School and University of Southern California, he studied with Jennifer Higdon, Christopher Rouse and Stephen Hartke. He is associate professor of composition at Michigan State University College of Music. Visit ZhouTianMusic.com for more. 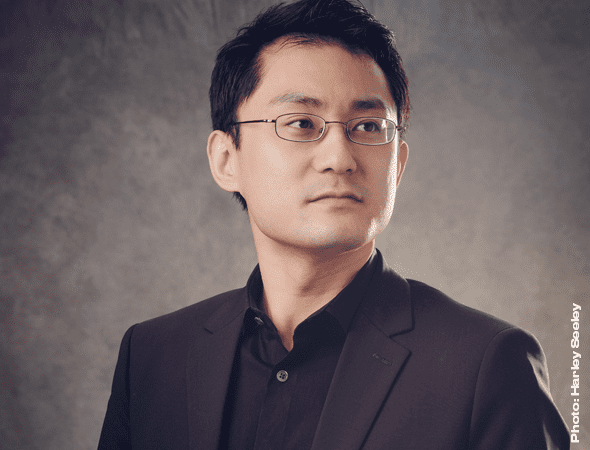 About 18 months ago, I was extremely delighted to have been invited to compose a new work commemorating the 150th anniversary of the First Transcontinental Railroad’s completion in May 2019. When I learned that 13 American orchestras — located along the route of the Railroad — would join forces together to commission and premiere this new work across the country, I was truly honored, as I knew the significant cultural impact this project would entail.

Begun in 1862 and completed in 1869, the Transcontinental Railroad effectively linked the US from east to west for the first time. Its cultural heritage includes the contribution of a thousands-strong Chinese and Irish workforce who toiled in severe weather and cruel working conditions. Numerous “hell on wheels” towns proliferated along the construction route and became famous for rapid growth and infamous for lawlessness. As the settlements pushed westward, there was a mixing of ethnic groups and cultures. Unfortunately, as the daunting task of laying tracks over difficult terrain increased, many workers perished, and many of the rest were denied the American dream by the enactment of the Chinese Exclusion Act in 1882. But those who stayed brought traditional art and music into the fabric of American culture.

As a Chinese-born composer who immigrated to this country, educated at the nation’s top music schools, and now serving at one of its finest institutions, I was moved to create this new work to tell a musical story, to convey a sense of spiritual perseverance, and to pay tribute to my own cultural heritage.

Transcend is consisted of 3 movements, each conveys a feeling that is at once personal as well as general, which, to me, is the key of the Transcontinental Railroad — behind the magnificent constructions and promises, it was the sacrifices of tens of thousands of workers and their families who made it work. In this piece, the epic and intimate passages go hand-in-hand in evoking the darkness and lightness, as if going through tunnels on a fast train.

The first movement, “Pulse,” starts with serene strings that remind me of the expansive desert of Utah and Nevada I visited. The music grows patiently and eventually bursts into a constant pulse of 152 BPM. The odd meters and violent poundings evoke the tension and suspense of man versus nature.

“Promise,” a meditative second movement, is a vocalise for those who sought for a better future. Lyrical woodwind solos, dashing flute and harp, and plush strings are met with folksy Chinese tunes and dark harmonies.

The finale, “D-O-N-E,” is based on the rhythm of the word “done” in Morse code. This single word was sent across the United States via one of the first nationwide telegraphs, when the Railroad was completed in 1869. (A quick shout-out to Raleigh, a railroad worker of 30 years in Omaha, for giving me the true story that inspired this movement!) Throughout the finale, “done” is passed back and forth to numerous instruments in the orchestra. An accumulation of materials sends the piece to a climax at the end.

Transcend was commissioned by the Reno Philharmonic in partnership with Utah Symphony, Omaha Symphony, Sacramento Philharmonic and Opera, Boise Philharmonic, Arapahoe Philharmonic, Central Wisconsin Symphony, Cheyenne Symphony, Chicago Youth Symphony Orchestras, Evanston Symphony, Idaho State-Civic Symphony, Michigan State University and Stanford University. My deepest gratitude goes to Laura Jackson, Music Director of the Reno Philharmonic, without whose passion, courage, and musical genius the project would not have been possible. I want to sincerely thank all commissioning partners and the many kind and enthusiastic men and women who offered insights and personal stories during my yearlong research and travel on this piece. As a composer, this has been truly an inspiring journey.