Off-Score: A look into the off-stage passions of Utah Symphony members

“I’ve been here for five and a half years,” Smith said. “It’s such a beautiful place to live, it’s so wonderful waking up and seeing the mountains every morning.” Prior to living in Utah, Smith lived in Dallas as the Principal Flutist for the Houston Grand Opera and Houston Ballet Orchestras. In her free time, she loves to cook, work with non-profit organizations, practice yoga, and slowly but surely renovate her home.

In March of 2017, Thierry Fischer and 14 Utah Symphony musicians volunteered during their spring breaks and teamed up with BLUME Haiti (Building Leaders Using Music Education) to teach 100 young Haitian musicians. Every section of the symphony, with the exception of tuba and harp, was represented. “I was slightly hesitant at first because it was my vacation week,” said Smith, “but I went and had the best time. It’s such a beautiful place.” 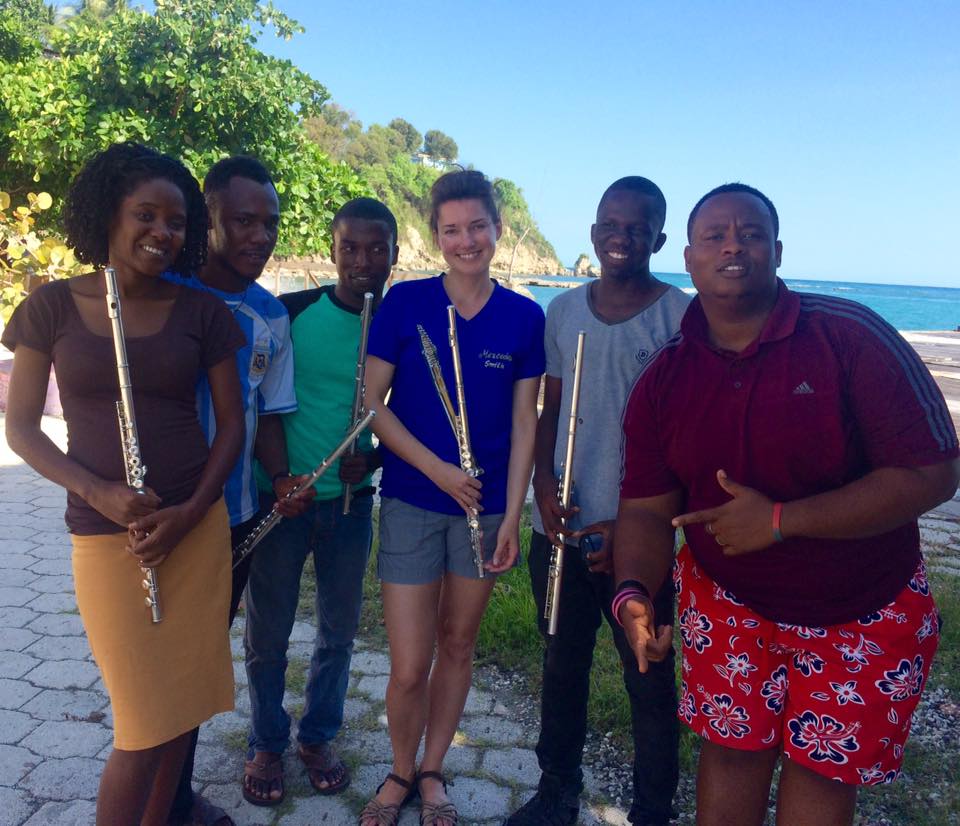 Mercedes Smith with students in Haiti

“The people are so positive despite all the hardships they’ve been through. They don’t lack in intelligence or work ethic, just opportunities, so we went there to create the opportunities for them.”

The musicians worked with students from 9 AM to 1 PM. “We would do everything from the basic fundamentals of scales and tone exercises, to private lessons, to masterclasses. Really anything that filled up four hours.” Following their instruction, the students rehearsed for their concert as an ensemble with Maestro Thierry Fischer.

She taught five young adults that all had their own students. Pupils that were too old for the program could audit the class, and students that were too young benefitted from trainings their teachers received. “There were around 100 students in the program last year, but I think we reached closer to 1,000, and that’s in schools all throughout Haiti,” she said.

Before arriving in Haiti, Smith had no idea what to expect. “I was surprised at the high level some of them played at,” she said. “It’s clear that had they had the opportunities that we have here in the U.S. … they would have been able to excel far more than the level they were currently at.”

Political crises, natural disasters, and economic struggle make upward-class mobility extremely difficult. “It’s nearly impossible to get out of the middle class—and it’s not like our middle class. It really is poverty.” BLUME Haiti provides leadership opportunities, teaching youth that they are not stuck—differences in their community are possible.

After returning from Haiti, Smith continued to think about music as an agent of social change. “The thing is, we have a bit of this problem in our own country too,” Smith admits. “Kids that are poor tend to stay poor, or I guess we’re now starting to understand that not everyone has the same upward mobility that we may have once had.” She partnered with Salty Cricket Composer Collective’s ‘El Sistema,’ a non-profit after-school music program that provides 17 hours of after-school music instruction, free of charge to Jackson Elementary students in Rose Park. 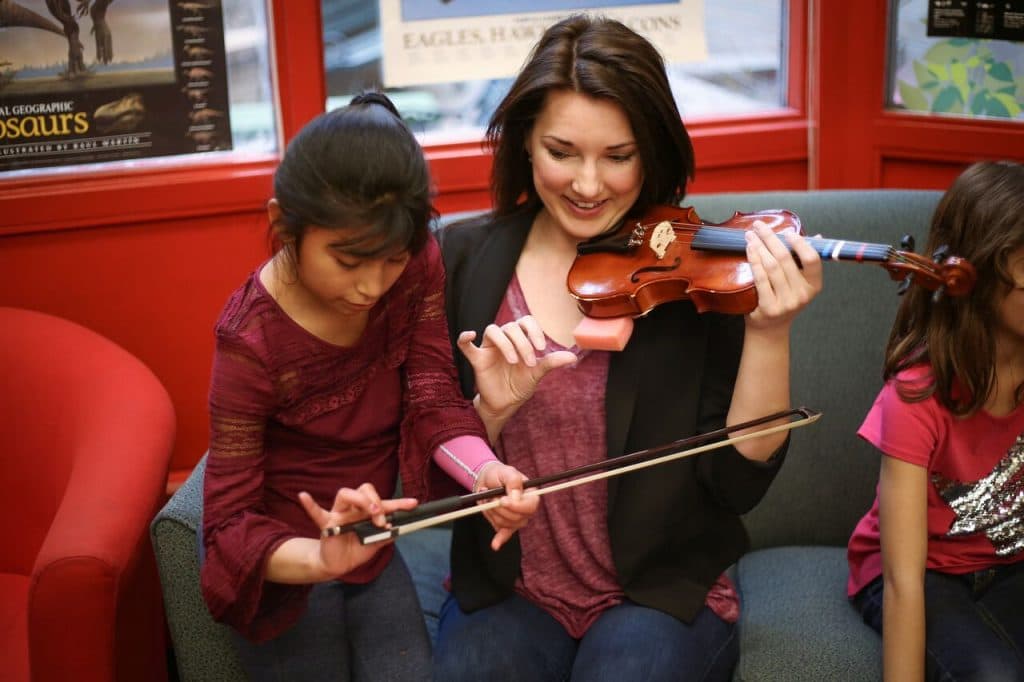 Based off the Venezuelan music education program, El Sistema is located in cities all throughout the United States. “I don’t know how long this program has been going, but it’s new,” Smith tells me. “Maybe 3-5 years old.” Currently, it only offers violin instruction but will be expanding to cellos and violas next year. “They need instrument donations, and they need to expand their budget,” she said.

Wanting to raise awareness and involve the Utah Symphony even further, Smith created “Saturdays with the Symphony,” a near-monthly exchange where one musician spends two hours with young students and their parents. “It’s basically a show-and-tell that’s 20 minutes long because the kids are so little.”

The musician plays a few pieces, speaks about their instrument, and discusses their journey studying music. “Then they have a little orchestra rehearsal, and we have the symphony member sit and play the little ‘Ode to Joy’ tune they’re working on,” she said. Following the concert is a potluck dinner where students and their families meet the musician. “It’s really such a motivating thing for the kids!”

Smith has made it her mission to expand the program to its full potential by utilizing the world-class talent available in Salt Lake City. “I really just want to help increase the visibility of this organization,” she said. “I want the symphony to do everything it can to help—that’s why I started this very small gesture of having one musician a month reach out to our community.”

In her experience, local Salt Lake initiatives don’t hold nearly as well as a large-scale Haiti trip would. “It amazes me how easy it is to fundraise for Haiti than it is to fundraise for children in our own community,” she said. “Jackson Elementary is a five-minute walk from the Utah Opera Production Studios.”

Interested in getting involved? You don’t have to be a professional musician to directly impact the lives of Salt Lake City youth. El Sistema is accepting donations to expand the program to its full potential. Donations can be made here.

If donations are not possible, Salty Cricket accepts volunteers of all kinds. If interested, please reach out to Victoria at [email protected], or by calling (919) 274-3845.

“[El Sistema] is small now, but it’s growing,” Smith says. “I can tell it’s going to be a huge thing in the future that affects so many children’s lives.”