Two of the greatest symphonists of the 20th century were Russians who worked under the relentless constraints of the Soviet cultural bureaucracy. In the years since the disintegration of the USSR, the relative positions of Prokofiev and Shostakovich have shifted, with Shostakovich appreciated for the grim anti-Soviet monumentality of his fifteen symphonies, while Prokofiev’s more cosmopolitan symphonies — seven of them, starting with the indestructibly popular neo-Classical No. 1 — have been eclipsed in the West by his brilliant ballet scores and his popular children’s suite Peter and the Wolf. For the most part, the symphonies of his compatriot Shostakovich are better known here (at least lately), and have attracted new interest among scholars and listeners as new information has come to light about his troubled relationship with Stalin and the Kremlin’s arbiters of cultural policy. For Shostakovich the symphonist, Soviet censorship was an irritant that inspired, like the grain of sand that an oyster turns into a pearl.

But Prokofiev, too, had his problems with Soviet cultural policies. His position in the forefront of modern music conferred prestige on the Soviet Union, but the government’s feelings about his reputation — and his own feelings — were not unmixed. He had been traveling extensively in the West and living as an expatriate, mainly in Paris, from 1918 through the mid 1930s. This kind of cosmopolitanism was always suspicious to Soviet authorities. Some densely difficult compositions that missed the mark critically, most notably his second symphony and violin concerto, contributed to his reputation as a bad boy of the avant garde, and to his own self-doubts as a composer. 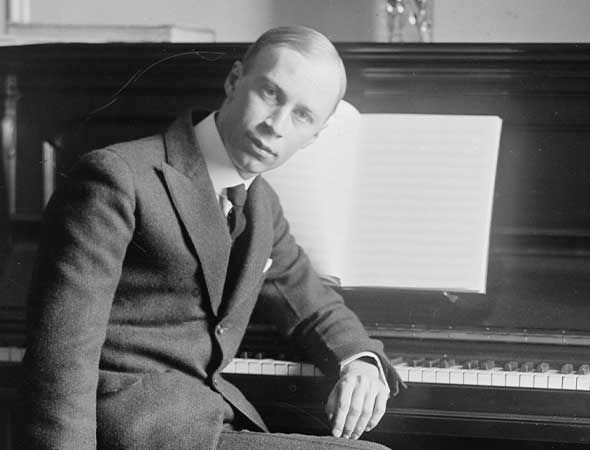 Prokofiev composed his fifth symphony in an apparent burst of inspiration, completing the score in the space of one month, about a year before the end of World War II. He had not attempted a symphony since his No. 4, completed fourteen years earlier. Now his health was poor, compromised by a series of heart attacks that had begun in 1941; he would never fully recover, and in the continuing complications would be worsened by a severe concussion in 1945, the year after he composed the Symphony No. 5. Perhaps with his musical legacy in mind, he countered these setbacks with a disciplined composing regimen (Prokofiev was always a highly skilled composer, able to work from memory or at the keyboard). Some of his contemporaries and current musicologists feel his life as a composer almost became a race against time: According to one contemporary, “His whole existence, all his energies, his entire mode of life were directed to the one aim, of saving for his work all the strength he had left. At times it seemed as if he knew his malady would defeat him in the end and he was deliberately hurrying to get all his ideas down on paper before it was too late.” If so, the radiance and muscular energy of his music did not hint at his internal struggle as an artist.

Freshness and energy are characteristic of all Prokofiev scores. But where some of his major works — for example, his five great piano concertos — thrill with their power and percussiveness, others are written in a more lyrical style.  The latter group includes his popular ballet scores, which shine with narrative expressiveness and singing melodies, and his Symphony No. 5, in which he expresses an optimistic vision of the future that was surely inspired by his hopes for the end of World War II. In a note on the symphony, he said it was meant “as a hymn to free and happy Man, to his mighty powers, his pure and noble spirit…I cannot say that I deliberately chose this theme. It was born in me and clamored for expression. The music matured within me.  It filled my soul.”

In fact, as music historians tell us, Prokofiev was probably never happier than he was while composing this symphony. If he had intimations of his own mortality in 1944, he also had a tranquil and loving family life with his second wife; he was the most highly esteemed of Soviet composers at home and abroad; and he was enjoying the hospitality of the Soviet Composers’ Union at a retreat in Ivanovo as he wrote. His contented work routine was the envy of his colleagues at Ivanovo, who included Aram Khachaturian, Dmitri Shostakovich and Reinhold Glière; according to Khachaturian, “The regularity with which he worked amazed us all!” Unlike Shostakovich, Prokofiev did not build programmatic narratives into his symphonies. In this case, it’s believed he arrived at Ivanovo with certain thematic ideas already sketched out, some of which may have been “in his pocket” for years. Still, critics suggest that the “free and happy man” of whom Prokofiev wrote was the composer himself.

The symphony gives full expression to Prokofiev the melodist, opening with a spacious, moderately paced movement in formal sonata form in which the woodwinds are featured as the bearers of melody. The second movement is dubbed a scherzo, but don’t be fooled by that term: Though it is traditionally associated with quick-paced musical japery, in Prokofiev’s hands it takes on the drive of a machine. More than one critic has sensed a suggestion of war machinery in Prokofiev’s motoric rhythms. But the more serious side to this symphony comes in the third movement, which unfolds in three parts. To the ears of your intrepid annotator it is not dark so much as thoughtful, with an introspective melody introduced by the clarinets that intensifies and then is supplanted by a theme stated (unusually) by the tuba. Any doubts are resolved in the triumphant and energetic final movement, which concludes what commentator Joseph Rodda has called “one of the supreme orchestral works of the 20th Century.”