Known and revered in the world of classical music by just one word — Fela — the great composer and musician Fela Sowande is acknowledged as the father of modern Nigerian art music.

The son of an Anglican priest of Egba descent, Fela helped establish Nigerian church music in the early 20th century.  His father, Emmanuel Sowande, taught at St. Andrew’s College, a missionary institute in Nigeria which trained young people to become teachers.  When Emmanuel was transferred to the Nigerian capital of Lagos, Fela accompanied him there and became a choir boy at Christ Church Cathedral.

Dominique-René de Lerma, Professor of Music at Lawrence University Conservatory of Music, and a leading authority on composers of African descent, notes that Fela’s transition from choirboy to music student began a twenty-year association with the choir’s Director, Thomas King Ekundayo Phillips. His musical education continued at the Church Missionary Society Grammar School and continued at Kings College.  Throughout that period, he studied organ with Phillips and faithfully attended his teacher’s organ recitals. According to de Lerma, “Throughout his lifetime, Sowande continued to cherish his interaction with Phillips, and was always eager to reminisce on the link between his own successful career and the training he received from Phillips.” 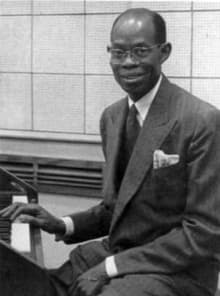 Fela emigrated to London intending to study civil engineering as a “safe” career choice. But before long, he was supporting himself as a jazz musician.  After founding a jazz septet comprised principally of musicians from the Caribbean, he decided to study music, enrolling at the University of London and the Trinity College of Music as an external candidate. He also took instruction with George D. Cuningham, George Oldroyd and Edmond Rubbra.

Sowande began performing on both the piano and the Hammond organ, forming associations with visiting African Americans including Paul Robeson and Fats Waller. His performance of George Gershwin’s  Rhapsody in Blue  as part of the show Black Birds of 1936 brought him to the attention of the show’s choral conductor, J. Rosamond Johnson, who introduced him to the works of Robert Nathaniel Dett.

Composed in 1944, with World War II still ongoing, the African Suite dates from this highly productive period of London-based composition and performance for Fela. In a CBC with the CBC Vancouver Orchestra recording that marked the fiftieth anniversary of this landmark work, liner notes give the following account of its composition:

The  African Suite, written in 1944, combines well-known West African musics with European forces and methods. For the opening movement,  Joyful Day,  Sowande uses a melody written by Ghanaian composer Ephrain Amu, as he does in the fourth movement,  Onipe.  In  Nostalgia, Sowande composes a traditional slow movement to express his nostalgia for the homeland (in itself a rather European idea).  At the centre of the work is a restive Lullaby,  based on a folk original.

The finale of the  Suite,  Akinla,  traces a very singular musical history. It began as a popular Highlife tune – Highlife being a pungent, 20th-century style, combining colonial Western military and popular music with West African elements and a history of its own.  Sowande then featured it as a cornerstone of his “argument” that West African music could be heard on European terms: the African Suite was originally broadcast by the BBC to the British colonies in Africa.