Born in 1881, Béla Bartók is often credited as one of the founders of modern ethnomusicology as well as a pioneer of modernism in classical music. Like the avant garde composer György Ligeti, who was born four decades later, he was ethnically Hungarian but hailed from a region that now forms part of Romania; his father was head of an agricultural college there, and his mother was a teacher. Both were able musicians, and Béla’s mother gave him his first piano lessons. After his father’s death the family relocated to the city now known as Bratislava, where Béla’s schoolmates included the fellow composer Ernö (Ernst von) Dohnányi.

One of the hallmarks of Bartók’s greatness, and of his profound influence upon the classical composers who followed him, is his early scholarship on the relationship between folk sources and classical music. His pathbreaking work in transcribing songs and folk airs occurred at the same time as John John Lomax was researching American roots music. Lomax, who was not a trained musician, used the new technology of the tape recorder to preserve previously undocumented ballads from tenant farmers and the children of slaves; Bartók used longhand musical notation in collecting songs from Slovak peasants. 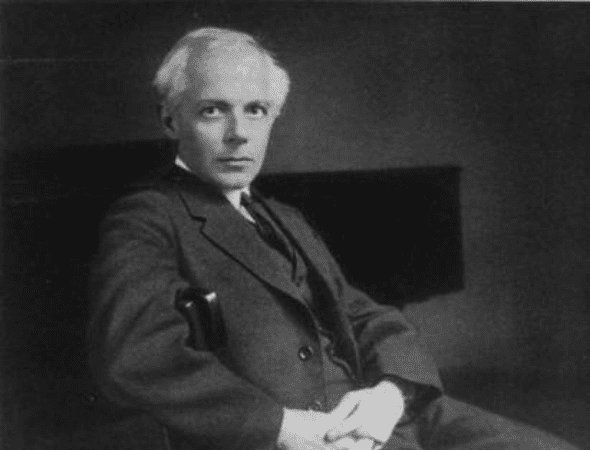 Many musicologists consider Bartók to be one of Western music’s transformational figures — a man whose commitment to aesthetic principles ran as deep as his talent, and whose name should be spoken alongside Bach’s and Beethoven’s…whose creative breakthroughs came precisely when they were needed, in the first half of the 20th century, as music was struggling to find a way to be modern. His major works are recognized as masterpieces that have formed a cornerstone of the post-Romantic repertory — music that opened new possibilities in composition even as they resisted imitation. By combining nationally distinctive folk sources with modern compositional techniques, Bartók developed a voice that was both individual and nationalistic, demonstrating how other composers could do likewise. But after winning recognition in the first half of his career and with every reason to expect an even brighter future, Bartók found the events of his own life paralleling Europe’s grim slide to war in the 1930s. Demoralized by the political landscape and especially by his country’s alliance with the Nazi regime, he left Europe for the U.S. at the start of World War II. Once he arrived, lack of public interest in his work sapped his creative energy just as leukemia began to sap his health.

Bartók composed the Divertimento for Strings in 1939, during the period before his emigration to the United States. We can only imagine the stress he suffered in those dark days — his horror at the rise of fascism in Europe and his concerns over his elderly mother in Budapest — but reprieve came from Paul Sacher, an important Swiss conductor. Through his ensemble the Basle Chamber Orchestra, Sacher was a major patron of contemporary music, commissioning such works as Igor Stravinsky’s Concerto in D Major and Richard Strauss’s Metamorphosen as well as compositions by Britten, Henze, Honegger and Tippett. His invitation to Bartók provided not only a much-needed commercial assignment, but also ideal conditions for its completion, including a month of solitude in luxurious guest accommodations at Sacher’s alpine chalet. The Divertimento was completed ahead of schedule, in just fifteen days, during which other concerns all but disappeared for the composer. He told his family that he felt like “a musician of olden times, the invited guest of a patron of the arts.” These congenial surroundings might be one reason for the buoyant energy that suffuses the Divertimento. They were all too short-lived; Bartok’s mother fell ill later in 1939 and died in December of that year, and the nightmare of fascism proved worse than Bartok’s worst fears. He left for the U.S. in 1940, and never returned.

The Divertimento itself can be said to follow a Baroque template for the concerto grosso, with a solo group of four strings foregrounded against a larger ripieno, but the sound has not even the merest backward glance (as we might encounter, for example, in Stravinsky). Instead, it is all Bartók, with complex polyrhythms and Bohemian vigor in the bowing. It unfolds from a lighthearted opening through a darker movement marked adagio, and ends with an effervescent rondo built around a double fugue.