Composer of the Week – Niccolò Paganini 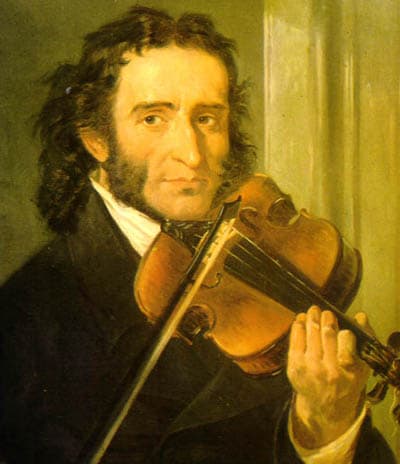 Happy birthday to that celebrated rock star of the violin world, Niccolò Paganini, who was born today in 1782.
Paganini started playing the violin at age 7 (that seems late by today’s child prodigy standards, doesn’t it?), and by the time he was 18, his income came from his violin playing.
Eventually he became so well-known he just travelled throughout Europe, performing as he went. Unfortunately, it was a very tough schedule, and Paganini spent most of his life ill, or recovering from illness.
Paganini’s death is very interesting, because when he died, he went so abruptly that a priest didn’t have time to give him the Last Rites, so he we denied a Catholic burial. Four years later, his body was allowed to be moved to his home town, but he wasn’t actually buried in a Catholic cemetary until 32 years later. It doesn’t end there… 17 years later a Czech violinist convinced Paganini’s grandson to have a viewing of the body. So he was dug up, displayed, and then finally laid to (permanent) rest in 1896.
Paganini’s compositions were designed to show off his violin skills, and he is best known for his caprices. Here’s the 24th, which has been the launching pad for many other composers variations.

And here’s his Concerto No. 2 for violin.