Composer of the Week – Bernard Herrmann 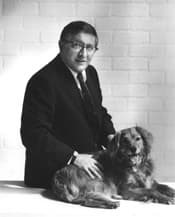 Happy Birthday to American composer Bernard Herrmann, who was born 100 years ago today! Herrmann’s early career was spent as a conductor for the CBS Symphony Orchestra. His radio broadcasts were focused on lesser-heard music, and he was a great champion of the music of Charles Ives.
Herrmann was also a composer, and he was able to make the jump from conducting to a long career scoring films with the help of Orson Welles. Herrmann conducted the music for Welles’ War of the Worlds broadcast in 1938, and when Welles moved to film, Herrmann followed. Herrmann’s first film score was for Citizen Kane and the score was nominated for an Academy Award. Not bad for a first effort!
Some of Herrmann’s most famous film scores are still very well known today. Here’s a few:
Psycho

The Day the Earth Stood Still