Musical Romanticism
The music of the nineteenth century reflects many of the traits of literary Romanticism. Music aestheticians, as well as the noted philosophers Arthur Schopenhauer and Friedrich Nietzsche, argued over the exact nature of musical “content” and whether music may contain emotion; nevertheless, most listeners hear a directness of emotional expression in Romantic music. This results from the emphasis composers placed on gradations in volume, variety in instrumental tone color, and expansion of the harmonic palette through the increased use of both dissonance and chromaticism.  Extreme contrasts within these elements result in constant fluctuation in mood, which the liberties in tempo caused by the use of rubato only serve to heighten.
In order to accommodate the changes in affect typical of Romantic style, composers found themselves penning longer compositions.  While a complete symphony by Mozart or Haydn averages approximately twenty minutes in length, Beethoven reaches around thirty minutes beginning with his “Eroica” Symphony of 1803 (and his Ninth Symphony of 1822-24 extends to nearly one hour).  After all, the stereotypical Beethoven affective trajectory traces a path from tragedy, through struggle, to victory within a single movement, and each of these sentiments warrants extended musical presentation so that the listener has adequate time to perceive it.  And as later composers explored other, unique emotional journeys in their works, pieces grew to even greater lengths.  By the end of the century, the symphonies of writers like Bruckner and Mahler, for example, usually run well over an hour.

Similarly, the interest in instrumental color caused the gradual enlargement of the orchestra over the course of the Romantic period. The chamber proportions typical of Beethoven’s symphonic works expanded to the size of the standard, twenty-first century ensemble around 1870. Yet as Romanticism approached its conclusion, Mahler and R. Strauss added even more instruments, as well as voices in the case of the former. Such incremental increases in instrumentation—especially when combined with the adoption of rubato as an expressive device—necessitated the use of a conductor.  Orchestral concertmasters, using their violin bows rather than batons, served as the first practitioners of the discipline of conducting, and specialists devoted to the field appeared by the middle of the nineteenth century.  The composers Berlioz, Mendelssohn, Wagner, Strauss, and Mahler all ranked among the great conductors of the 1800s, a list of figures that additionally included Hans von Bülow, Hermann Levi, Anton Seidl, and Hans Richter. 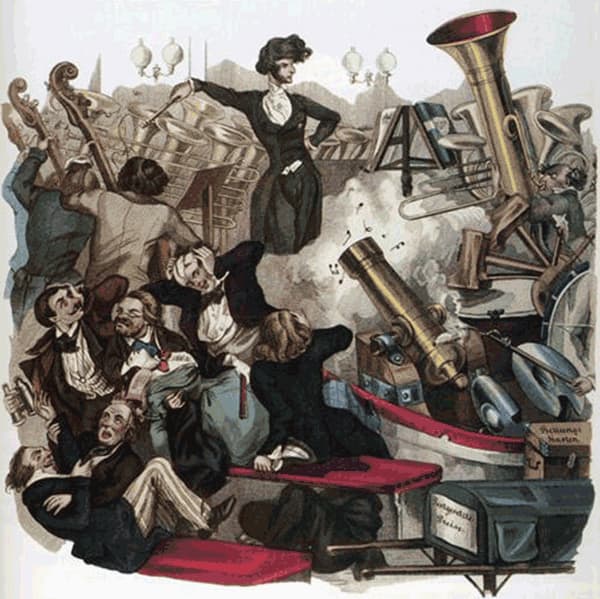 Opera plots, Romantic song, and the poetic associations assigned to instrumental program music also mirrored the fascination with imagination and fantasy seen in literary Romanticism. In particular, the exotic, fanciful, and grotesque inspired composers of the era.  Far-off places and foreign cultures allowed nineteenth-century artists to envision the locales and culture that European colonialism was bringing closer together, as well as providing a means of addressing taboo subject matter.  Thus, a Spanish gypsy sings her most famous melody to the provocative rhythms of a Cuban dance in Bizet’s Carmen (1875), and within the drama, this aria serves to warn to the respectable military hero Don José that she will cause his doom.  Likewise, in Donizetti’s Lucia di Lammermoor (1835), a Scottish bride, who has promised herself to another, finds she must marry a man she does not love to appease her family; the anxiety of this situation causes her to go insane, murdering her groom (offstage) on their wedding night before appearing (onstage) in a blood-soaked nightgown to sing the famous “mad scene.”  And instrumental music fares no differently than these operatic examples.  Though it lacks the darkness of the previous works, Rimsky Korsakov’s Sheherazade (1888) demonstrates exoticism through its narration of the tales of Sinbad, as well as other stories from 1001 Arabian Nights.  In contrast, Berlioz’s Symphonie fantastique (Fantastic Symphony) (1830) has all of the macabre elements that Sheherazade lacks.  According to its program, this piece depicts a lovesick artist under the influence of opium; the artist murders his beloved, receives punishment in the form of the guillotine for his crime, and finally the beloved reemerges to dance at the artist’s funeral—amidst a group of witches.

Designs for the original production of Carmen in 1875 indicate a desire for the scenery and costuming to reflect the exoticism inherent to the opera’s storyline.  Pierre-Auguste Lamy’s lithograph preserves plans for Act I.

Nationalism also materialized in the Romantic era as a major component of the socio-political climate of the nineteenth century.  As modern nations sought political autonomy, they naturally began to forge national identities both in language and in the arts.  Musical responses included the employment of nationalistic programs for instrumental works, song texts in indigenous languages, and opera plots in these same languages and on nationalistic themes.  Dvorák’s opera Rusalka illustrates this trend: the Czech-language text concerns a water sprite of Slavic myth.  In contrast, Verdi’s opera plots only approach Italian subject matter symbolically, with his main characters frequently suffering oppression under foreign dictators, much as northern Italy labored under Austrian rule; however, these topics resonated so greatly with Italian audiences that Verdi became inexorably linked with Italian unification and independence, and Italians sing the chorus “Va pensiero” from Nabucco (1841)—an opera treating the Babylonian captivity of the Jews under Nebuchadnezzar—as a second national anthem today.
Another means of promoting nationalistic feeling in music involves drawing upon the unique musical material of a country or culture rather than using the default style of Romanticism, which has its roots in French, Italian, and especially Austro-German traditions.  National repertories of folk music served as both inspiration and germinal material for a great many composers.  Whereas Tchaikovsky occasionally quotes a folk melody (as, for example, in the finale of his Fourth Symphony of 1887), Musorgsky crafts new melodies modeled on the trappings of Russian folksong: the opening “Promenade” movement of Pictures of an Exhibition adopts a folk scale (i.e., the pentatonic scale stereotypically associated with Asia and easily playable on just the black keys of the piano keyboard), irregular meter, obsessive repetition (especially of the short-short-long rhythmic pattern), and a narrow range characteristic of the Russian folk repertory. Composers like Sibelius and Chopin used the folk music of their nations as the source of their technique in a manner akin to Musorgsky, though to a lesser extent.  Many of Chopin’s harmonic inflections derive from Polish scales, and his decision to compose polonaises and mazurkas most decidedly stems from nationalistic impulses; in much the same manner, Sibelius uses folk scales and the melodic contours of Finnish folksong in his symphonic poems and songs, as well as his symphonies.
In the larger cities, new music halls opened as the century progressed, allowing more members of the economically-empowered middle class to regularly attend concerts as a form of entertainment.  But to pack these venues, composers and performers alike needed to cater to their audiences’ tastes.  Virtuosity flourished in this environment, with figures like violinist Paganini and pianist Liszt amazing listeners with their feats of previously unknown technical dexterity highlighted by their newly-written compositions.  Productions of a single opera would likewise vary regionally in order to fit the specific abilities of the performers, as well as to fill any requirements of the opera house or expectations of the local audience.

Theodor Hosemann’s 1842 parody of Liszt in concert portrays him performing before an audience consisting primarily of infatuated female fans.  If the exaggerated height of the pianist-composer’s left hand does not suggest virtuoso technique, then it at least indicates his sense of showmanship, as does the placement of the piano.  Pianists prior to Liszt always placed their instrument so that they directly faced the audience; Liszt holds the distinction of first positioning the piano in a manner so that listeners were able to see the performer’s hands.

Although Romanticism perhaps reached its zenith in the lush harmonies, brilliant orchestration, and lyrical melodies of composers like Puccini, Wagner, Brahms, and Tchaikovsky, the latter years of the nineteenth century clearly reveal that continuation of Romantic style would not have proven practical.  Orchestral performing forces larger than those requested by Mahler and Strauss require a significant financial investment, and works longer than Mahler’s symphonies would challenge the attention span of even the most dedicated of audiences.  More importantly, Romantic music—despite its reliance on dissonance and the use of notes outside the scale—conforms to the major-minor system. In Tristan und Isolde (1859), Wagner managed to avoid clarifying the central note of his scale until the final chord of the opera; every composer after Wagner had to push this harmonic ambiguity a little further, and by the early 1900s, the major-minor system fell out of use.  Its absence constitutes the primary attribute of twentieth-century music.
© 2014 by Bettie Jo Basinger