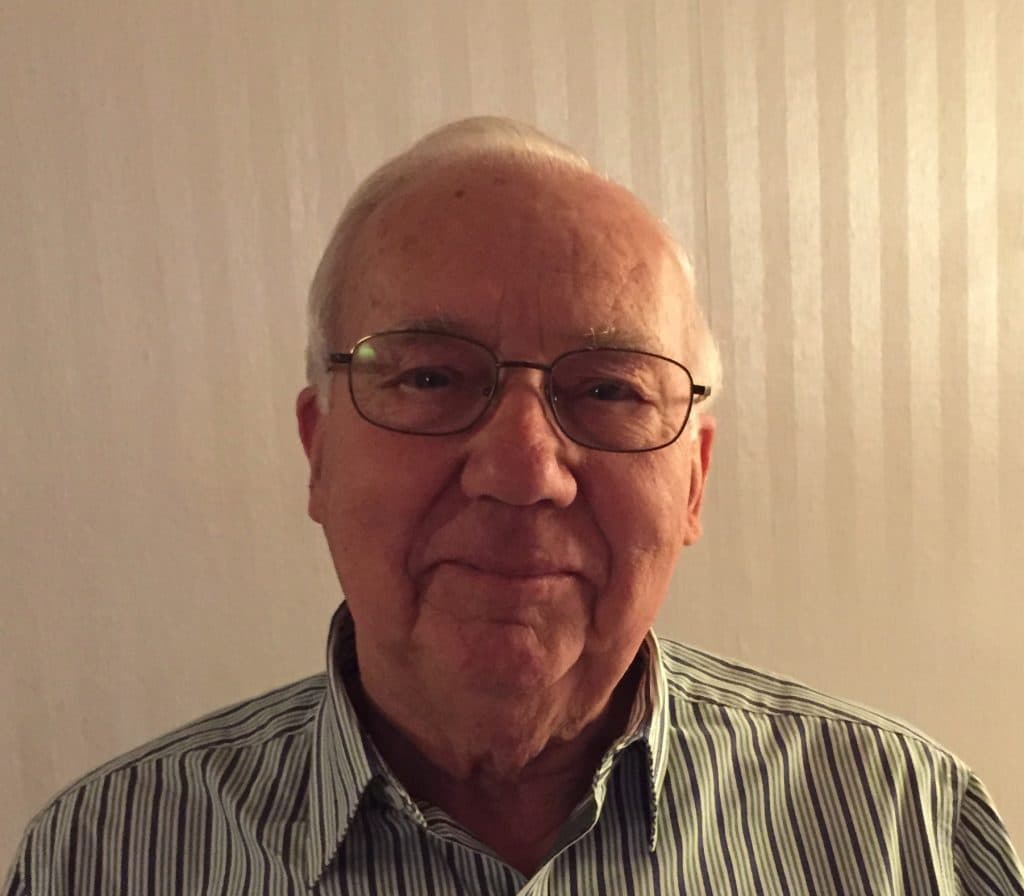 An Orchestra of Teachers

When I started with the symphony in 1956, the salary had just raised to $50/week. There were only two woodwind spots in each section, and those were already filled by our principal Gene Foster and our piccolo player Ted Wight, so I was hired as second flute, but I also had to handle the library to earn a full contract. My wife, Rosie, spent a lot of time putting bowings in the violin parts. The principal players were getting $125 /week, and they could manage to live on that, barely. At one point there were 35 members of the symphony who, like me, were schoolteachers. Several of the districts were very good about it. When we had to be gone with the orchestra, instead of calling in and having them hiring the substitute, they had us get our own substitutes. Therefore we could trust the person who came in and we could have some continuity in the program. We would usually have the same substitute, as needed, for the entire year. Very often the substitutes were students in college that were going into music education. We were able to function pretty well. I could keep my program going because the students got acquainted with the substitute; the substitute knew what I was doing, and it wasn’t a big disruption. We had to have the second employment, especially if we had a family or were married: you couldn’t survive on the symphony salary in those years.

One year, around my seventh year in the orchestra and after we had started rehearsing in the University of Utah Union Ballroom, Abravanel decided he was going to raise the salary from $50 to $75 a week. It wasn’t just $5 a year, it was a big jump. Abravanel told the board that he had authorized the salary to be raised to $75 a week, and I think they raised his annual salary from $16,000 to $25,000. The treasurer of the board just went ballistic! “We can’t do that! That can’t happen!” Abravanel said, “Well, it’s done.”  I think he pulled his own salary back a ways, but not for the musicians; the treasurer resigned immediately, but the plan worked. He just said “it’s going to happen and the board is responsible for finding the money,” and it happened.

It was unusual for the Utah Symphony and for an orchestra from a rural part of the United States, to all of a sudden be playing with Gina Bachauer in the Athens Bowl, and spending four weeks performing in Europe, traveling around, and receiving good reviews. European audiences were surprised to see many women in our orchestra at that time. There were no women in the Vienna Philharmonic for another twenty years after that. But here we were playing very successful concerts of great works with a lot of women in the orchestra. It was really groundbreaking.

At the time I worked in the library, Abravanel would call and ask me to come over. He’d have a score that he had laid out, and on the inside front page he’d have written all his notations that he wanted put in the parts. I had to interpret what he wrote for every instrument, which consisted of about fifty parts. He had written out all the little nuances and changes he wanted to put into each player’s printed music. One Thanksgiving morning—usually a day off—I got a call from him. We sat down in his studio and he laid out his notes and said, “I want this to go into all the parts,” because there was going to be a recording and he was really concerned. He was very thorough. He was also very upset if, when we played a particular part, every musician didn’t respond to the notation that was in there. He’d stop and say, “Don’t you have something in your part?” They’d say, “Well, yeah.” “So do it.”

When I was at Eastman in 1952, a very interesting thing happened: I looked at the bulletin board one day and saw, “Join the Gustav Mahler Society.” I thought, “Who’s that? What’s that?” And then later that year, the Eastman Junior Symphony played Mahler’s First Symphony. That was my first experience with Mahler. So I was a little bit acquainted with Mahler when Abravanel started programming his music eight years later. There was a resurgence of interest in Mahler at that time. So many of the recordings that had been available were very old and outdated, if they had even been recorded. That was the goal of both Westminster when they started and later Vanguard, to update these, since they would be in stereo, and all of much better sound quality. The Mahler recordings were done in the Tabernacle and the U of U music hall.

Playing in the Tabernacle

A problem we had early on was learning how to record in the Tabernacle. Our first year that we recorded in the Tabernacle, there was so much reverberation they weren’t sure how to deal with it. They required us to lay out our coats on top of the front rows of the Tabernacle seats. Later we got big drapes and put them all over the seats to try to soak up some of the sound. In addition, they put a mike in front of every section so they could catch that sound immediately, and then they could add the reverberation from the hall. It was very interesting how the recording engineers did it. As a side note, once, I was sitting in the audience in the middle of the south balcony, and the most prominent sound was coming from the bassoon section, because from where I was sitting, the bassoon sound followed the ceiling just to my spot.

Musical America was the prominent music magazine of the time. It covered all of what was happening throughout the music world and America. Abravanel was on the front cover of one issue because of the Mahler recordings, so our recording did have a great impact. I remember I was teaching school, and I subscribed to the magazine for the school library. I was surprised when the issue came with Maurice Abravanel on the front cover. It was a major moment for the orchestra, for the city, for the state, for what we were doing to have this publicity. I think it awakened everyone to Mahler throughout the country, just the mere fact of what we were doing. Other orchestras didn’t want to be left behind, or out of what’s going on, and so I’m sure they picked up on it and started performing more Mahler.

When the U.S. went on the tour to South America, a very interesting thing happened. Doug Craig, and I, along with the rest of the orchestra had the day off in Corrientes, Argentina, not the evening—as we had a concert that night—so we decided to walk around town a bit. We were looking for the train yard. As we were walking along, a fellow came up to us, out of the blue, put a record jacket in front of us, and said, “Will you autograph this?” We just looked at each other. It was one of our recordings, but it was published by Philips, in Europe. We thought, “This is really something!” You know, to get that far away from home and discover that people are aware of what you’re doing.

An Orchestra without Its Conductor

Abravanel was a very humane person, and everyone loved him. We’d do anything for him. We didn’t question his affection, and we definitely didn’t exhibit any displeasure with the way he worked us in rehearsal, because we knew he would sense it. In fact, if he saw during a rehearsal that someone was uneasy or unhappy or something else, he’d give them a call later and say, “Is there a problem?” Very often he would call to check up and see how your family was. He was very human. I had been in the orchestra twenty-some years, when Abravanel had his heart attack. I got into a very depressed state trying to think of how we were going to function beyond Abravanel. Because the Utah Symphony was our local community orchestra and many of the players were local. That’s not the case now. We worried how we were going to function with another conductor. I know when they hired Thierry Fischer that was an important consideration. We all wanted somebody who was going to be here and invested in this community.

In those early years of school concerts, ballet and even some opera, Abravanel was the conductor. He tried his best to relate to the school audiences. A lot of the students had a difficult time understanding his accent, but he enjoyed the concerts. In fact, he told me personally, “I feel that some of my greatest musical experiences with the symphony were in high school gymnasiums.” We played for a group of people who had never heard anything of Brahms, for example, and yet they were all intently listening.

Getting South High School’s Principal Onboard

While I was teaching at South High, the symphony was scheduled to come and perform a concert. The school had to pay $750 towards the fee. Our auditorium seated 1500, and we decided that if each student paid fifty cents, we could come up with the fee. So we started moving ahead on this. We got the day scheduled and the publicity was out in the school, when the principal all of a sudden said, “You know, there are a lot of our students that may not like this type of an experience, so I’m going to excuse those who do not want to go to the concert to go to the library during that period of time,” which just deflated us. He was not onboard. So we played the concert, and it was great. Abravanel, cagey as ever, got the principal up on stage and congratulated him on the conduct of the students. He also complimented him on the number that attended, and what a great job he and the music faculty were doing. He really laid it on. The next time the orchestra was to perform at South High, we didn’t have any problem. The principal took over, as it was “his baby”, and we no longer had to worry about how much money they raised.