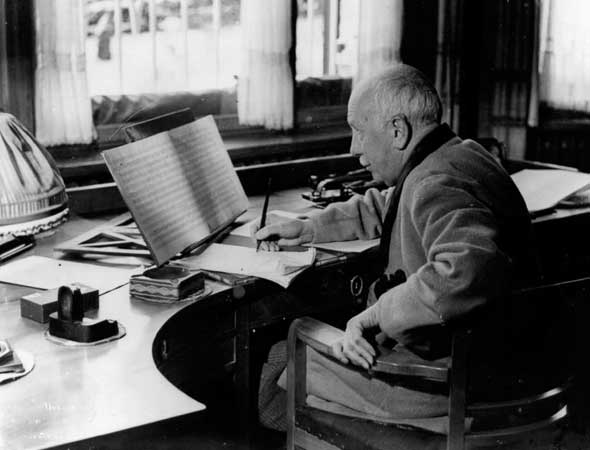 If Richard Strauss has a musical trademark, it is the construction of densely chromatic chords and their dizzying changes. Der Rosenkavalier is a case in point. Musicologists sometimes analyze a symphony in terms of how a composer “gets out of” each movement; as Strauss leads us through exotic modulations, half the fun is marveling at how he gets where he’s going, leading us back to his tonic key. Der Rosenkavalier is filled with gorgeous waltzes and versatile leitmotifs, enough to provide two orchestral suites that don’t quite manage to crowd in everyone’s favorite moments from the opera.

The most famous of Der Rosenkavalier’s waltzes has a melody so perfect that it seems always to have been there—indeed, the lecherous Baron Ochs sings it as if it were a traditional (if bawdy) song. (“With me, no night will be too long for you… no room too small for you.”) It sounds lush and singable when voiced by an operatically trained bass-baritone, but don’t try humming this melody at home. With its deceptively tricky stepwise modulations in minor thirds, it will defy your best efforts in the shower. Another melody really is based on an Austrian folk song, but in Strauss’ hands it is totally transformed—rendered in two parts as the culminating duet of two young lovers, then surrounded by breathtaking, densely chromatic chords in the high woodwinds. “It’s a dream,” they sing, and indeed it is, as Strauss’ inimitable harmonies evoke twinkling stars.