Come as you are: A look inside the life of trumpet player Travis Peterson 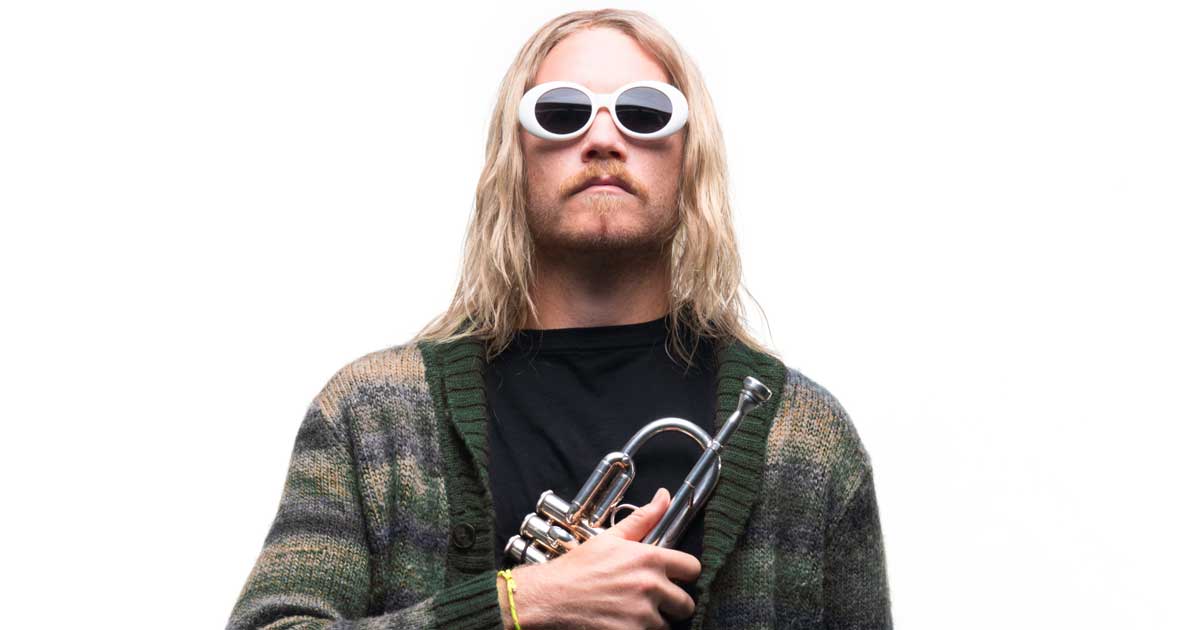 In 2013, principal trumpet player Travis Peterson was nearing the end of his time with the New World Symphony Orchestra and searching high and low for the next big step in his career. He was on his thirty-someteenth audition for a place in a professional orchestra and was frustrated by his job prospects.

“I was on the cusp of being selected of all these otherauditions—I was in the final three of all of them. I thought I would have made it into at least one of them, but after 10 auditions, I started to wonder what was up,” Peterson recalled.

Frustrated and feeling the pressure to make major life decisions, he called his wife, Andrea, who was on vacation with her family in Utah. She reassured him that whatever happened, everything would be fine. She also mentioned that Salt Lake City was a great place where they could be happy if that orchestra job didn’t pan out.

It may not have been exactly what he had wanted to hear at the time, but her words proved prophetic. 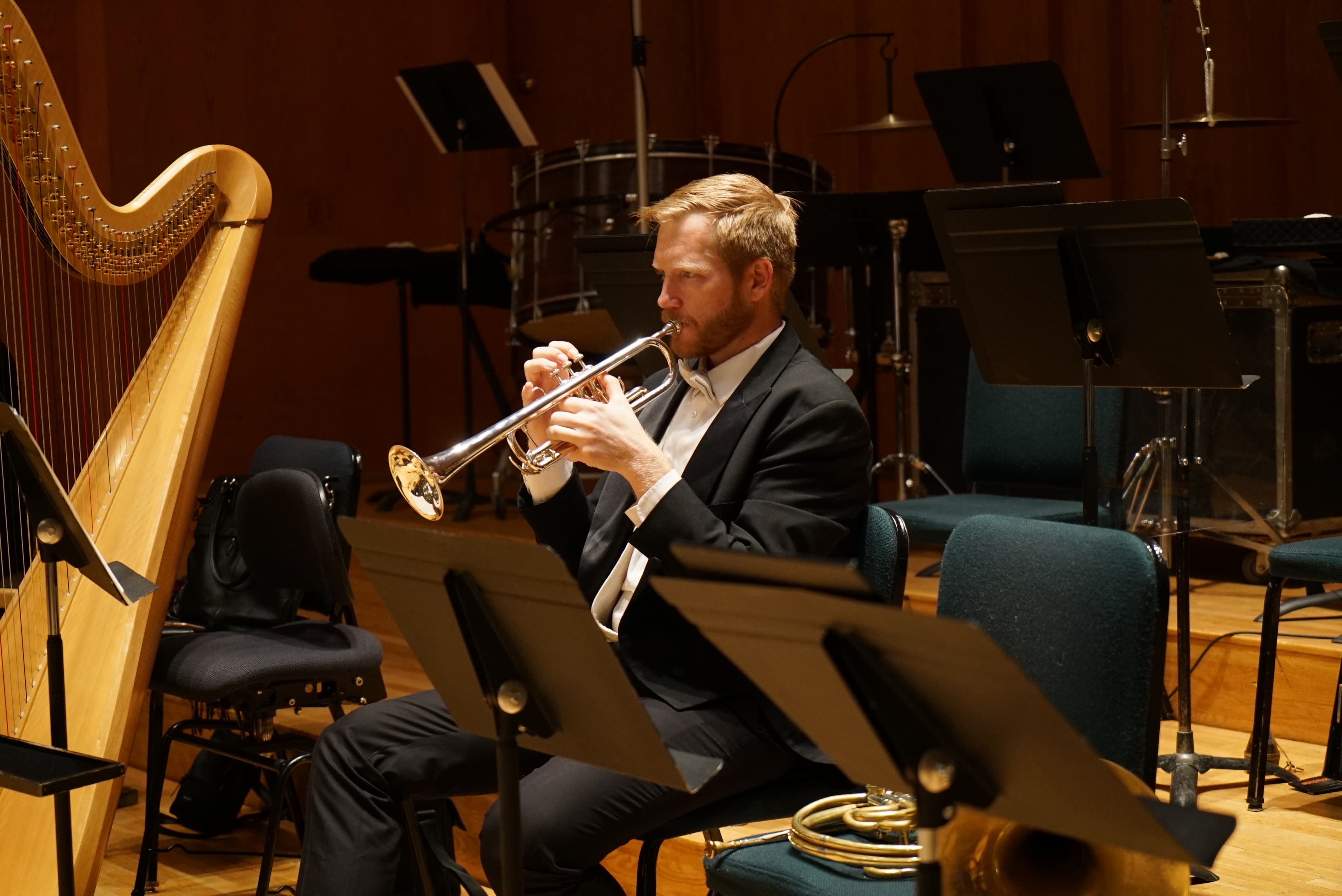 “Andrea always had the most faith and trust that I would win a job one day,” he said. “Utah Symphony was the next audition I took after that, and it was an okay audition. I wasn’t gunning for a principal position, but it all just worked out.”

Come as you are

“I really enjoyed the whole process of becoming Kurt Cobain for this photo shoot,” Peterson said about his transformation into the classic grunge rocker for the Utah Symphony 2018-19 campaign. “When I looked in the mirror, I thought, ‘Holy crap! I look just like him!’”

“I don’t think I relate to his personality very much,” Peterson confessed. “I think Kurt Cobain was a true artist in the most creative sense of the word,” Peterson said. “I can’t relate to every aspect of his personality, but he was a very intellectual person.”

Although he does not relate strongly to Cobain, it’s hard not to see some similarities in their lives.Much like Cobain, Peterson doesn’t like the idea of having the spotlight on him but rather prefers the attention to be on the music. “When you think of a principal trumpet player, you think of a charismatic leader, but I think of myself as more of a wallflower.”

And Peterson’s 30-plus auditions with professional orchestras? He was in good company with Cobain. The late rock star’s wife, Courtney Love, was quoted saying before he got his big break, Cobain wrote to every major and minor label asking them to sign Nirvana.“My wife says I have a silent ego,” Peterson said with a subtle smile and the cool, collected swagger of a rock star. Despite being the principal player of an instrument that has the reputation of being the loudest in an orchestra, he lives a fairly quiet life and has a reserved personality. But he still loves the opportunities the orchestra has given him.

“I’ve loved the repertoire! I’ve gotten to play virtually everything I’ve ever wanted to play,” citing works like John Williams’ Jurassic Park and the Shostakovich’s Piano Concerto No. 1.

Peterson grew up on a dairy farm in a small town called Milaca, Minnesota, and originally got involved with music through his middle school band program. He soon found himself hooked.

“I didn’t buy Nirvana or any of those things when I was a kid—I bought Jurassic Park because I loved the brass sounds. My family didn’t even have a CD player!”

“I was so inspired by my middle school band director—I wanted to be like him,” Peterson recalled. That inspiration ignited a passion for music. He would hurry home from school, finish his chores on the dairy farm, and then find a place outside to practice an old coronet he found at his grandmother’s house. “I would even stay after school to practice—I would take that time to discover trumpet.” 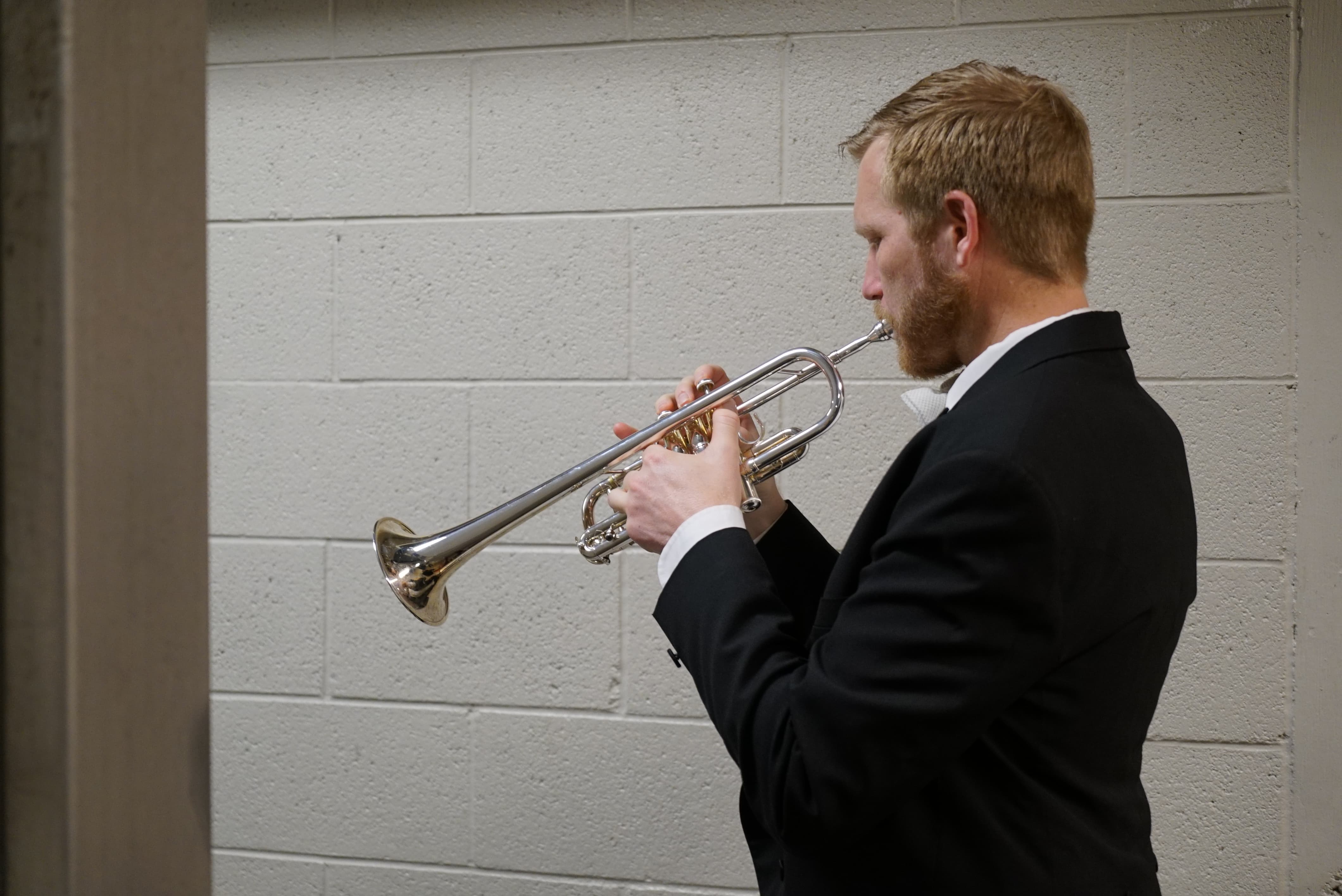 His true goal was drum corps—the kind of marching bands you find at football games and parades. “I was obsessed with drum corps, and I did it for 6 summers,” he mused. “My rationale was that I would work my way up the ranks. I thought it would be great for when I was a band director.”

At this point, he couldn’t even fathom a career in a professional orchestra. “I just felt like there was more value to band music. Orchestral music was a snooze!”

As he progressed through his studies, his passion for music endured, but his dream of being a band director waned. “I hated the pedagogy classes—all I wanted to do was get in front of a class and teach them to believe in music like band class did for me.”To this day, Peterson has a deep respect for band teachers, but he saw the work and sacrifice they sank into their vocations and began to realize that trumpet performance was a perfect fit for him.

After completing his undergraduate degree, he found himself in Lubbock, Texas waiting tables and auditioning for grad schools. Up until this point, Peterson’s involvement in drum corps had him focused primarily in popular music, but he had little formal experience playing classical, orchestral music. Graduate school would be a completely new reality for him.

“When I went into these auditions, I wasn’t that nervous,” Peterson admitted. “I didn’t know who any of the people on the audition committee were—maybe that was a good thing!”

Peterson auditioned for trumpet legends like Mark Gould, whose resume boasts principal positions at The Metropolitan Opera and the New York Philharmonic as well as illustrious teaching appointments at The Juilliard School and the Mannes School of Music. He conceded that he didn’t feel completely prepared to go into these auditions. 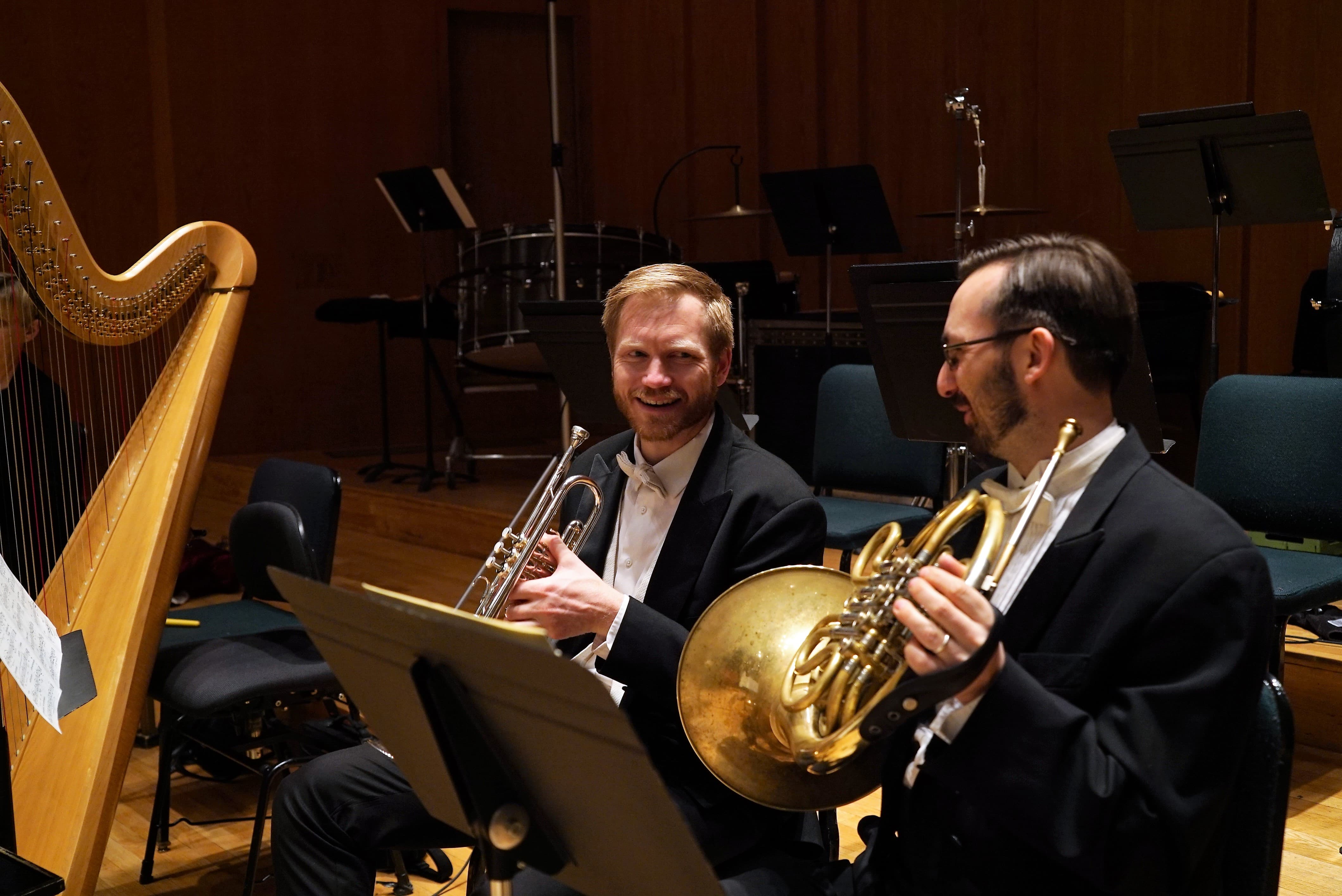 “One of the excerpts I had to play for my audition was from Strauss’ Also Sprach Zarathustra.  I thought I could do it with little preparation because everyone knew that part,” Peterson said. “I was just going to play the opening.”

Part-way into playing, Gould stopped him to say this wasn’t the excerpt they had requested. Peterson was confused, so Gould had to sing the excerpt for him. “I was kind of clueless!” he admitted.

Since moving to Salt Lake City, Peterson has enjoyed everything that Utah and the Utah Symphony has to offer, like how easily he can get into the mountains or go for a run.

When he isn’t busy practicing and performing, you can find him baking. “I have a huge sweet tooth. I just found a recipe for brioche donuts!” Baking is a great way for him to let off steam. He bakes delicious breads, cakes, and treats and posts them to his Instagram account.

Most of all he loves how much he clicks with the other orchestra members. “I love playing all this music, and I love playing it all at such a high level,” he said. “But I’m friends with my colleagues too. It’s nice to be able to go out and get a beer after work or just talk. When the orchestra is clicking, it’s a feeling you can’t get anywhere else.”

Peterson has also benefited from the legacies left by other orchestra members. Nick Norton, the former Principal Trumpet player of the Utah Symphony has been a mentor for Peterson as he’s juggled the pressure of being in a leadership role. 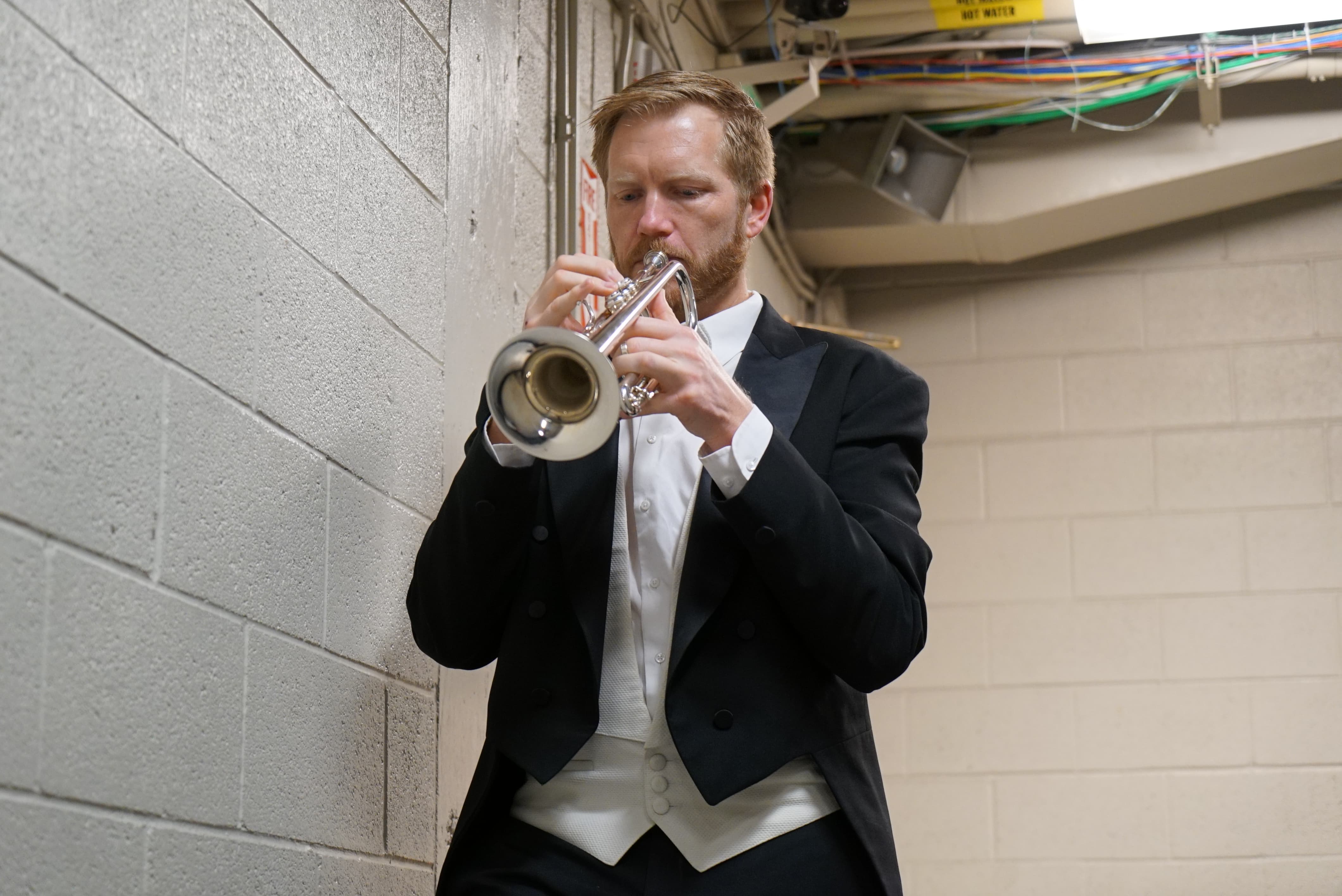 “He’s been a great sounding board for me,” Peterson said. “You may feel like you’ve missed the mark, but Nick has helped me see that no one cares. Everyone is so focused on doing their best too, and he’s helped me realize that I’m the only one who’s thinking about this.”

Peterson finds inspiration all around him. “Seeing my wife perform is inspiring to me,” he said, noting that she is a talented actress and artist pursuing a career in New York City. “I also find inspiration in my sister. She’s a graphic designer, and the support that we give each other is like emotional food. It helps me live and breathe.”

“When you get to the core of it, rock stars are artists. Every musician in the Utah Symphony is an artist,” Peterson said about his colleagues. “What makes us special is that we come together as a group and use our individual voices to create art.”

Listen to Travis talk about his studies and career playing the trumpet here.