Rachmaninoff – Concerto No. 2 in C minor for Piano and Orchestra, Op. 18 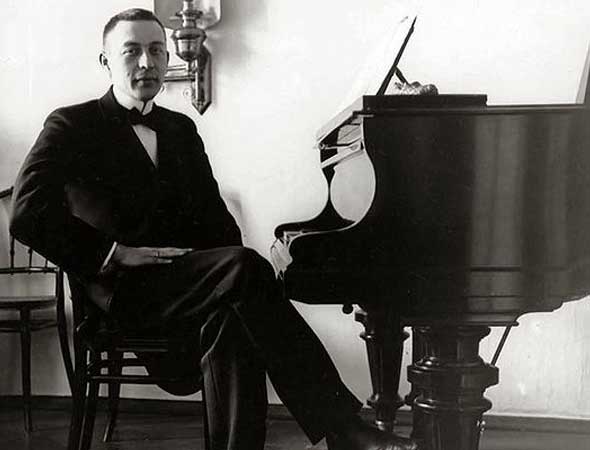 One can hear the brooding depressive as well as the ardent romantic throughout the concerto. In the first movement, marked moderato and written in C minor, an opening of intense foreboding builds through a series of powerful chiming chords in the piano. As the tension builds to a breaking point, the piano’s simulated chiming rolls into a sweeping main theme that is taken up in the violins but quickly engulfs the entire orchestra. From this moment on—indeed, from the very opening bars, with the piano’s lone voice—the concerto announces itself as a hugely scaled musical statement that balances sweeping, melancholy “outdoor” phrases with romantic “interior” melodies.

When a rolling theme emerges, its march tempo gives it the quality of an inexorable machine, with only the solo piano to challenge it. Slow chords in the strings open the second movement, an adagio that moves from C minor into E major. While the piano delineates a theme through fleet, poetic arpeggios, the overall mood remains melancholy, with a short exchange between orchestra and piano developing the movement’s motifs. Yet this tinge of sadness does not overwhelm—perhaps because of the sense of romance and melodic richness that pervades the whole concerto. Its songful quality, which gave rise to two Frank Sinatra tunes based on just the first movement (“I Think of You” and “Ever and Forever”), takes full flight in the lush, gorgeous third movement, marked allegro scherzando. This movement is built around a melody that is like the distilled essence of romance, and that forms the basis of the song “Full Moon and Empty Arms.” It has been quoted in dozens of movies to convey the exquisite pleasure of love anticipated… and the exquisite pain of love unfulfilled. It can also be said to have saved Rachmaninoff ’s life: when he composed this melody and discussed it with colleagues, it secured his more optimistic outlook on his composing prospects. This is the theme that turned Brief Encounter into a three-handkerchief weepy, and that prompted Marilyn Monroe to tell Tom Ewell, “Every time I hear it I go to pieces!” in The Seven Year Itch.

The concerto ends in a flourish of virtuosity and optimism. The last movement, an allegro, opens with an introduction that moves away from the previous movement’s E major, where the music was lush but the emotions lingered in an atmosphere of twilit moodiness. To close, it moves from C minor to C major with ever-increasing tension and energy. The final thematic statements and coda are resolved in C major, in a loud and ecstatic finale.