Born with the 20th century, Aaron Copland — with his air of dignity and intellectualism—became known as “the Dean of American Composers” later in life largely for earlier accomplishments, such as Billy the Kid and Appalachian Spring. He was born in New York City to Russian-Jewish immigrant parents, and when he evinced an early interest in music, his older sister became his first piano teacher. By age 15, he had his sights set on a career as a composer.

In 1921 Copland ventured to France to further his musical studies at a newly formed school for Americans at the Fontainebleau chateau outside Paris. There he came under the influence of one of music history’s legendary pedagogues: Nadia Boulanger, whose uncanny ear and uncompromising standards helped two generations of American composers find their individual voices. Talents as diverse as George Gershwin and Phillip Glass studied with her, but Copland was the first American composer to do so.

Instructional visits to the Parisian home of Nadia Boulanger and her sister Lili were like holy pilgrimages for musical aspirants, but these sessions often resulted in excoriation rather than benediction: the Boulangers were demanding and blunt in their judgments. Most of all, Nadia insisted that her composition students look within themselves and their national cultures in developing an individual style. This aspect of her creative philosophy is summarized in a quip sometimes attributed to Oscar Wilde: “Be yourself. Everyone else is already taken.” It is a philosophy that Aaron Copland took to heart, eventually developing a style of music that is uniquely his and uniquely American. 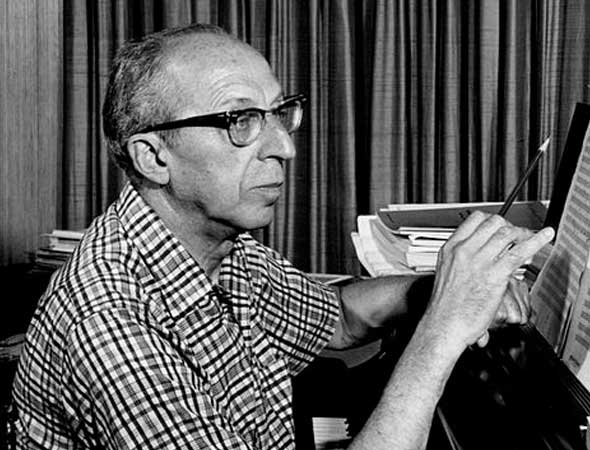 Copland returned to the U.S. three years later with a major commission in hand: Nadia Boulanger had asked him for an organ concerto. Coming from France, where the organ is especially revered, the assignment was a mark of high esteem.  In the pieces that followed—Music for the Theater (1925) and a piano concerto (1926)—we can hear Copland experimenting with indigenous musical sources, including Jewish folk dances and Hebrew chants he heard as a child, along with jazz and blues. We can also hear lessons learned from the music of Stravinsky (whom Boulanger greatly admired). But it is in his “western ballets”—Billy the Kid, Rodeo and Appalachian Spring—that we can most clearly hear Aaron Copland as a young composer becoming himself.

The commission for Billy the Kid was proposed to Copland by Lincoln Kirstein, a seminal figure in American ballet. Though not a dancer himself, Kirstein was a Harvard-educated intellectual and self-styled impresario whose commitment to dance gave rise to Ballet Caravan, the forerunner of New York City Ballet. Copland’s “American sound” was just what he wanted for American dance: like the earlier dancer/choreographer Ted Shawn of the Denishawn school, Kirstein envisioned a distinctively American style of dance that could be that could be esthetically refined yet gender-neutral or even masculine when appropriate. America’s cultural heritage was as rugged as the pioneers who settled the West. What better subject for American dance than the life of Billy the Kid? Kirstein envisioned a one-act ballet of purest Americana with choreography by Eugene Loring and music by Aaron Copland.

At first, Copland worried that he was the wrong man for the assignment. But his brilliant score, at once naïve and sophisticated, proved otherwise. Perhaps he should have known: like Billy the Kid, aka Henry McCarty, aka William H. Bonney, Aaron Copland was a native New Yorker! In the movements of Billy the Kid we hear quotes from traditional western songs including “Great Granddad;” “Git Along, Little Dogies;” “Old Chisholm Trail;” and “Goodbye Old Paint.” Copland’s repetition and manipulation of folk tunes to fit an evolving narrative is a recurrent device we hear in Rodeo and Appalachian Spring as well as Billy the Kid. It always sounds simple, natural and inevitable.

In Appalachian Spring we hear the most confident and classic expression of Copland’s American sound. Commissioned as a ballet score by the choreographer Martha Graham, Appalachian Spring presents a dance scenario that is no less American than Billy the Kid. But it is more abstract, in keeping with Graham’s brilliantly stark esthetic. In Graham’s frontier landscape, plot points and character interactions are less important for the story they depict than for the spirit they embody. Her choreography strips emotion to its core.

Appalachian Spring was originally scored for a chamber orchestra of 13 and premiered with the Graham company in 1944. The premiere performance, presented (appropriately enough) at the Library of Congress in Washington, D.C., is a milestone in American cultural history. Everything about the ballet was instantly recognizable as both new and classic: the dramatic vocabulary of Graham’s dance language; the stark, suggestive set design by artist Isamu Noguchi; and Copland’s distinctively American score. Rescored for full orchestra the following year, it won the Pulitzer Prize for music.

Appalachian Spring depicts scenes from country life in 14 brief episodes. While the story is set in springtime and focuses on the natural cycle of life’s annual renewal, Graham’s “spring” is not a season of the year, but a stream—a symbol of water, life, and renewal. The dance culminates in the celebration of its characters, 19th-century Pennsylvania settlers including a young wedded couple, a “pioneer woman” and a preacher, after building a farmhouse.

Without the mastery and the confidence he’d gained in his earlier western ballets, it’s doubtful Copland could have written Appalachian Spring; in fact, he did much of the work in 1943 and 44 without knowing the specifics of the scenario or even a working title. But the resulting work has the quality of a testament—simple, elemental, profound. And once again he makes it sound easy. As for the title, Graham came across it only weeks before the ballet’s premiere. It is a stanza from “The Dance,” a poem by the American writer by Hart Crane:

O Appalachian Spring! I gained the ledge;
Steep, inaccessible smile that eastward bends
And northward reaches in that violet wedge
Of Adirondacks!

For Copland, who had followed his studies in Paris by exploring Schoenbergian atonality, Appalachian Spring represented a reaffirmation of the greatness of America’s musical and cultural heritage. It opens and closes with prayerful chords developed from traditional hymns, eventually centering on pastoral variations on the Quaker hymn “Simple Gifts.” Its climactic setting of this stark melody combines simplicity and majesty in a way that is profoundly moving and utterly American.