“Among the very first LPs in my youthful record collection were several from the Utah Symphony Orchestra under Maurice Abravanel on the Vanguard label…It would be fair to say that, despite never having even set foot in Utah, the Utah Symphony played a very significant part in my musical development, even if I did not know it at the time. How sad, therefore, that I had forgotten all about its existence until this new release from Hyperion turned up. Once again they have opened my eyes to music I had not heard before…There is a revelatory performance on this recording…Interestingly, the promised revelation comes with the orchestral version of The Carnival of the Animals. With pianists Jason Hardink and Kimi Kawashima bursting with virtuosity and projected well to the forefront, there is something of a chamber feel to this, but enhanced by some simply exquisite instrumental playing from the orchestra itself. Of special note here is the delectably spiky clarinet ‘Cuckoo’, the tremendously invigorating flute as it takes flight across ‘the Aviary’ and the exquisitely graceful cello ‘Swan’.”  – MusicWeb International 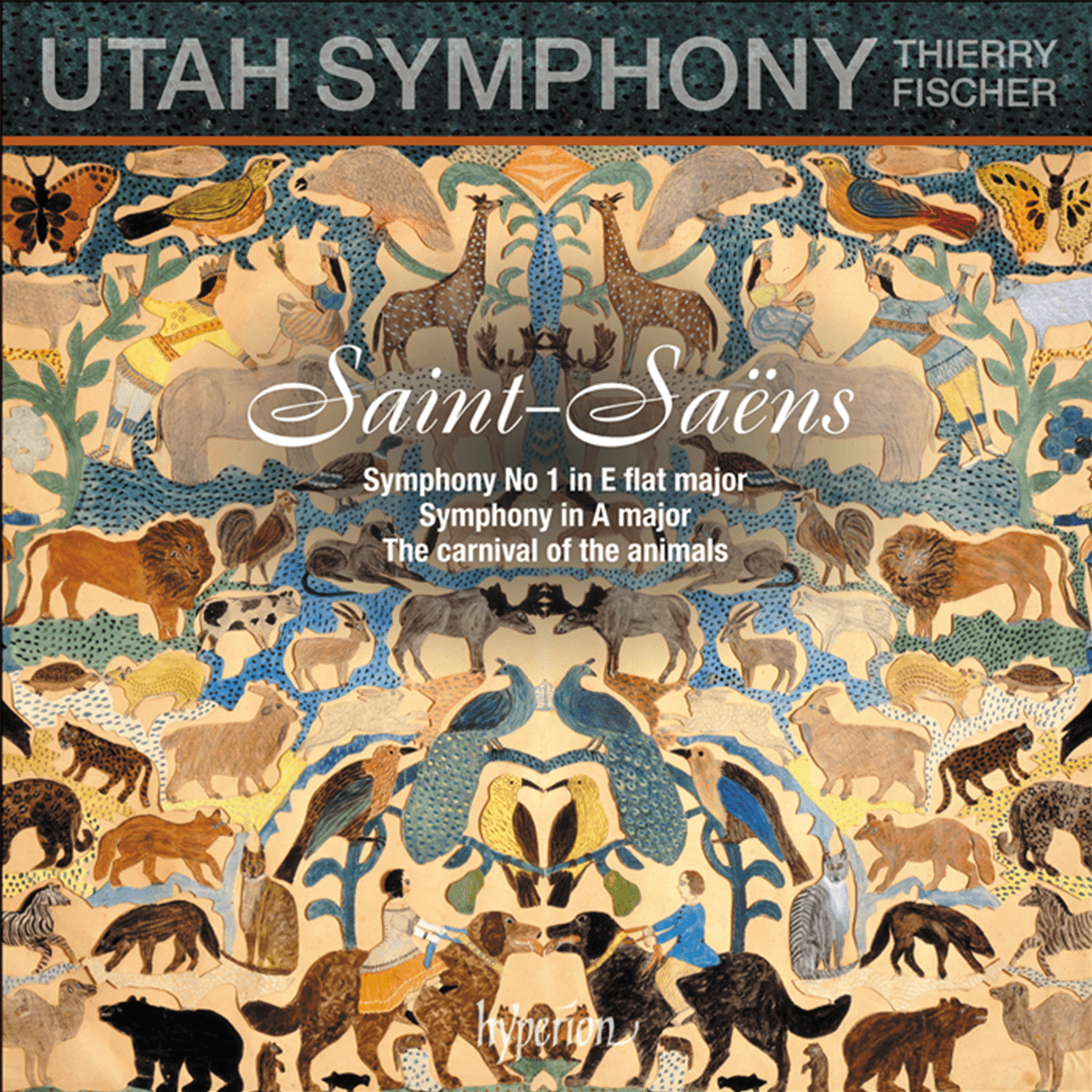 A series we’ve enjoyed here on Record Review is coming to an end—the Saint-Saëns symphonies from the Utah Symphony conducted by Thierry Fischer … a reading [of Le carnaval des animaux] that goes for character and colour rather than slapstick comedy, trusting the brilliance of Saint-Saëns’s writing to do the trick. A lovely thing to find tucked away between Saint-Saëns’s two early symphonies. – BBC Record Review

Finally Saint-Saëns, surely one of the most Christmassy of composers. This year the Utah Symphony and Thierry Fischer have been on a voyage through the French composer’s five symphonies for Hyperion, which means welcome airings for the Urbs Roma and excellent First and Second Symphonies, as well as the ubiquitous Organ Symphony. They also find space for the Carnival of the Animals and Danse macabre in superb performances that benefit from Hyperion’s customarily excellent recordings. If you have never heard it before, I highly recommend the disc with the first two symphonies, influenced by Mendelssohn but already showing the French composer’s mastery of melody – or the Carnival of the Animals, for a freshly-minted account… – Ben Hogwood, Arcana 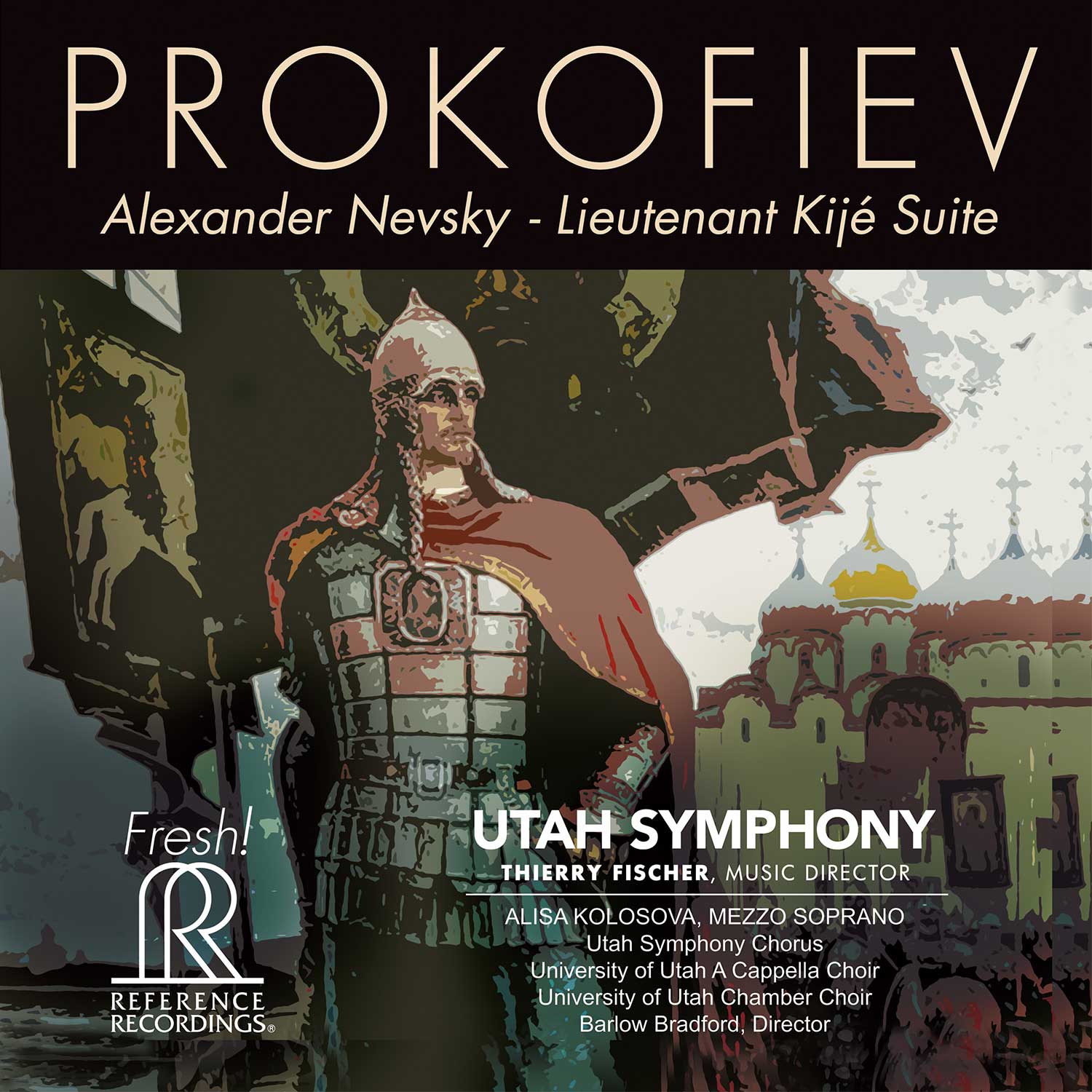 “But it is not unfair to say that this new Utah recording sounds every bit as good as the Schippers and Reiner-and maybe a little fuller and richer. Imagine! It has taken about 60 years to make a recording of Alexander Nevsky almost as good as the Reiner and the Schippers! They represent the Golden Age of conducting and recordings. How do you explain how Thierry Fischer and his Utah forces come so close to that level? Why them? I don’t know, but I give a lot of the credit to Reference Recordings and their brilliant engineers.” -Donald Vroon, American Record Guide

“I’ve never heard a rendering of the battle as bleak and crushing as this. One feels the impact of the breaking ice and the noise of war. By the end, we are spent, as the strings linger over the now-quiet battlefield.” -Kal Rubinson, Stereophile

“But it is not unfair to say that this new Utah recording sounds every bit as good as the Schippers,and Reiner-and maybe a little fuller and richer. Imagine! It has taken about 60 years to make a recording of Alexander Nevsky almost as good as the Reiner and the Schippers! They represent the Golden Age of,. conducting and recordings. How do you explain how Thierry Fischer and his Utah forces come so close to that level? Why them? I don’t know, but I give .a lot of the credit to Reference Recordings and their brilliant engineers.” – Donald Vroon, American Record Guide

As you might well imagine, Alexander Nevsky is not easy to record satisfactorily because so much of its music is cinematically conceived, with discords and clashes that challenge the recording team as much as they do the performers. The present live recording, made in the Maurice Abravenel Hall in Salt Lake City, Utah by a recording team from Sound/Mirror, Boston, is one viable solution to the problem of capturing an extremely varied work as a complete, whole experience. -Phil, Atlanta Audio Club (December 2019)

This knocked my socks off! Some of Prokofiev’s most thrilling music, performed by massive orchestral and choral forces in a sublime recording. – BBC Music Magazine (January 2020): Brief Notes 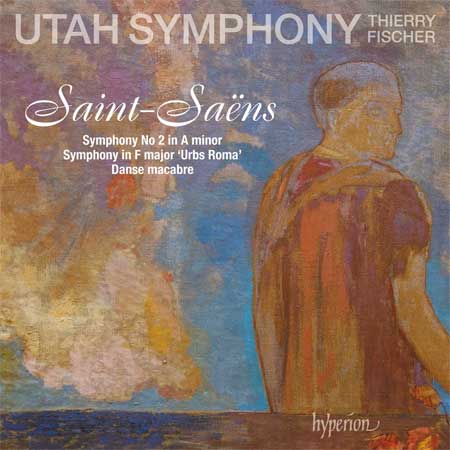 As in their superb account of the Organ Symphony (1/19), Thierry Fischer and the Utah Symphony’s performances here are polished and graciously articulate. Fischer doesn’t drive nearly as hard as Jean-Jacques Kantorow (BIS) in either symphony, favouring poise and charm over heat and bite. There’s exhilaration, too, mind you – in the quicksilver finale of the A minor Symphony, for example, Fischer and the orchestra show they can turn on a dime.
The Danse macabre moves with an elegant yet persistent impetus; listening, one feels impelled to keep moving. Madeline Adkins plays the solo violin part alluringly yet with a slightly devilish edge to her tone. The entire programme is recorded with crystalline clarity in a natural, airy concert-hall perspective. I’m already craving the next installment.

…it’s altogether possible that it’s the performance [of the Symphony No. 2 in A minor] that makes the piece sound so convincing, as it’s easily the finest the work has yet received on disc. Not only does the Utah Symphony play with the same conviction and finesse it brought to its superb recent recording of the “Organ” Symphony and the little-known incidental for the forgotten play La foi (68201), but there’s also a sparkle and subtlety in its playing that will inspire slack-jawed admiration. For instance, in the skittering finale no detail of articulation, phrasing, dynamics, or attack and release goes unattended, but at no point does anything sound calculated or fussy. Quite the contrary, it all turns into an irresistibly joyous, spontaneous-sounding romp that’s more than worth the price of the album. 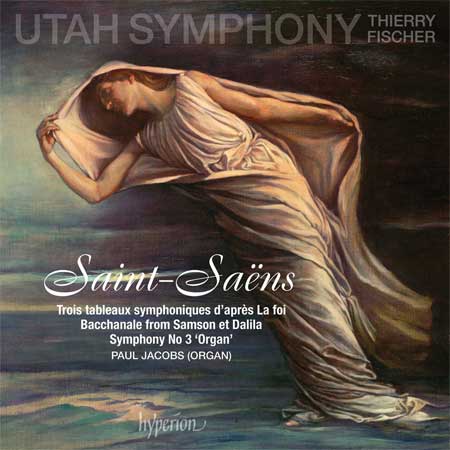 …If you’re a skeptic, I hate to tell you this, but the Utah Symphony’s performance [of the ‘Organ’ Symphony], led by Thierry, is as good as it gets. It easily stands comparison with the best I’ve heard. The rhythmic articulation of the tricky 16ths throughout the first half of the first movement is clean and crisp. The strings are full-bodied and creamy smooth in the Adagio second half of the first movement, and when the organ steals in, almost unnoticed, for the very first time on a low pedal Ab, you feel the vibrations in the floorboards. […] This is an all-around winning release, and one that I hope will encourage Thierry Fischer to commit more of his performances with the Utah Symphony to disc.

…this is one [recording] you really do need to hear… as in all the great recorded performances nothing seems forced or overdone, nor is there a hint of the trite or bombastic. The fact that it was also captured live only proves what a stunningly fine group the Utah Symphony under Fischer has become… one of the most desirable Saint-Saëns collections in years.

“Terrific performance. Can’t wait for the next installments to come along.” – The Arts Fuse

“A lushly warm, resonant performance of this mighty symphony, whose organ part explodes into a triumphant, Bach-influenced C Major at the finale.” – Gary Lemco, Audiophile Audition

“Utah Symphony – Under Thierry Fischer, the Utah Symphony continues to roar back onto the recording scene… The rarely-heard Trois tableaux symphoniques d’apres La Foi that leads off the first volume of the cycle is a find – beautifully and often sparingly scored, setting scenes in a gracious, melodic Romantic manner with passages of mystery and atmosphere and a suitably grandiose conclusion.

The “Bacchanale” from Samson et Dalila, once a popular fixture at pops concerts and on records, serves as a suavely played intermezzo between the La Foi music and the actual opening of the Utah Saint-Saлns symphony cycle, the inevitable Organ Symphony. Overall, the latter is beautifully paced in a classically proportioned conception.” – Classical Voice North America

“Fischer and the orchestra have launched a Saint-Saëns cycle, which is all to the good, and it includes obscure orchestral works along with the numbered symphonies, which is even better. The main attraction here, the Symphony No. 3 in C minor, Op 78 (“Organ”), gets a clean, shiny performance with an electric organ at Salt Lake City’s Abravanel Hall, in the hands of Paul Jacobs, actually providing the atmospheric wash Saint-Saëns had in mind more effectively than a bigger instrument might have. This is a major release from an exciting American orchestra. Hyperion producer Tim Handley does fine work in a live performance at Abravanel Hall, surely unfamiliar for the label’s engineers.” – All Music

“Playing under the baton of Thierry Fischer, the Utah Symphony has become one of the most impressive American orchestras on the scene in recent years, especially for one located in a second-tier city. The group’s interpretations of these three works…are consistently impressive, its tone both rich and balanced and its phrasing suitably Romantic without being overweeningly dramatic. Highly recommended.” – CD Hot List

“Paul Jacobs’ pipes shine with unshakable dynamite. The Organ teases in the ‘Poco adagio’ while grandeur and stately form pervade within the ‘Maestoso’: he’s the catalyst for a passionate apex. Step by step M. Fischer builds strength and leads the Utah Symphony to a crowning finish. The final measures possess some of the most visceral approaches, and, thus, Thierry Fischer wins with masterful diction at this particular moment in time.” – ConcertoNet

“Despite having no anniversaries to celebrate, Camille Saint-Saens, the supreme gay composer of the 19th century, had himself quite a year. The cycle of symphonies with Thierry Fischer conducting the Utah Symphony (Hyperion) peaked with a recording of the Third, with Paul Jacobs at the organ, that augurs to become the reference recording.” – Tim Pfaff, The Bay Area Reporter