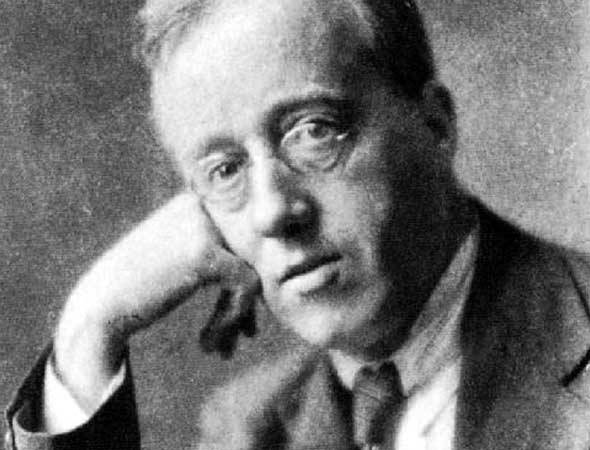 His name may not sound English, but his music certainly does. Gustav Holst is among the best loved of all 20th-century English composers. Born in Cheltenham, an ancient town in the Gloucestershire countryside, Gustav was the scion of a musical family. His father, Adolph von Holst, was a professional musician who became organist and choirmaster at Cheltenham’s All Saints’ Church; his mother, Clara Cox, was daughter of a respected solicitor and a talented singer and pianist in her own right. On his father’s side, Gustav’s forebears were professional musicians going back three generations—to the court of Imperial Russia, where his great-grandfather was composer and harp teacher.

Despite all that, we might surmise that Adolph was none too pleased when Gustav gravitated toward a composing career. When the boy demonstrated his precocity, undertaking grandiose compositions at an early age — perhaps as early as age 12 — Gustav’s father tried to steer him toward piano performance. But Adolph also funded Gustav’s study of counterpoint at Merton College, Oxford, when he was 17; upon his return, he was appointed as an organist and choirmaster at Wyck Rissington in Gloucestershire, a position that included responsibilities as a choral director.

By 1892, Gustav, though still a teenager, composed an accomplished and successful Gilbert-and-Sullivan-style operetta. At an age when he might reasonably be considering his college options, he had a musical portfolio of unusual breadth. Throughout his career, he continued to combine an awareness of the practicalities of the professional musician’s life in England with the changing aesthetics of the international classical music scene—most especially the impact of German, Austrian and Russian composers.

We can hear the full range of Gustav Holst’s musical background and education in his best-known composition, The Planets. It is endearing, charming and full of the openness of the English plainsong tradition; yet it is also executed with the sophistication and cosmopolitanism of a composer well acquainted with the latest international music of his day. But if the confident exuberance of The Planets suggests that this suite was easy for him to compose, Holst has actually accomplished something extremely difficult with it, sustaining our rapt attention for seven movements spanning almost an hour with no content other than the personalities and moods represented by each planet. Every movement is intensely colorful and specific, with each planetary subject so clearly in view that we feel ready to land our NASA module on the surface. Yet there is no story line, no overarching form…nothing but mood and the richness of the melodic subjects and rhythmic figures that Holst employs, including many folk songs from His beloved England.

It’s hard to beat a luminous night sky as a source of inspiration for philosophers, physicists, poets and kings through the ages. Are the heavens for artists to understand, or do they lie within the realm of science? Like so many of the great classical thinkers, the ancient Greek mathematician Pythagoras saw no separation between the two. On the scientific side, he defined the numerical ratios by which vibrating strings produce tones that are octaves apart. But he also speculated about “music of the spheres,” the subtle sounds of heavenly bodies expressing the ineffable qualities of the Greek Zodiac according to orbital ratios. Those inspiring celestial lights? Yes, they were physical objects obeying scientific laws, but they were also the embodiments of characters in Greek myths. We could hear their personalities if we really listened.

Composing “for large orchestra” between 1914 and 1916, Holst placed himself firmly in this Pythagorean tradition, giving us one of the most remarkable of all orchestral suites. From its enormous popularity and persuasiveness — is it possible not to have a great time listening to this music? — one might think that this suite would exert a gravitational pull of its own, influencing other composers to write orchestral suites and tone poems that draw on its success.

Expansive in every sense, The Planets also calls for a chorus of female voices;

Holst uses these resources to the hilt, giving the suite a sense of astronomical space and the swirling energy of a spiral nebula. Though he denied that the suite has any connection to the classical Zodiac other than the names and traits of the personified planets, that connection by itself is enough for the music to conjure strong images of the mythological deities associated with each. We hear seven movements in all: Mars, the Bringer of War; Venus, the Bringer of Peace; Mercury, the Winged Messenger; Jupiter, the Bringer of Jollity; Saturn, the Bringer of Old Age (purportedly Holst’s favorite!); Uranus, the Magician; and Neptune, the Mystic. Earth is not among those profiled; nor is Pluto, which was discovered and then ejected from the planetary club after Holst composed. Now that another “ninth planet” has been discovered, and a huge one at that, we can only wonder what Holst might have made of it.

The suite opens with Mars, plunging us into a universe of amoral phenomena; the bringer of war is presented as neither good nor bad, but remarkable for his virility and power. This is conveyed with pounding rhythmic figures of five beats each, indicative of brute force, and with a melodic theme that seems capable of going anywhere.

Venus, by contrast, announces herself with an ascending figure of four horn notes that give rise to serenely converging chords voiced in the woodwinds; her sound is celestial, with the shimmer and sparkle of the celesta, harp and glockenspiel, bringing a sense of peace and of vertiginous space, in contrast to the earthbound Mars. Mercury, the winged messenger, is quick in every sense: the suite’s movement of shortest duration, it conveys a sense of darting speed through devilishly constructed runs of rapid notes in two different keys and rhythms. The juxtaposition of opposing elements, a favorite device of Holst’s (and a difficult one to apply) is especially vivid here. Again, it gives rise to a marked contrast: Jupiter, the bringer of jollity, in a movement full of the charm of traditional English folk tunes.

There is something deeply endearing in Jupiter’s wholesome cheer that has made it the most popular of the suite’s movements, and has revived interest in the songs it quotes.

If any of the suite’s movements can be said to suggest a conventional narrative line, it is Saturn — Holst’s favorite — in a life’s journey toward reconciliation. What might sound like hints of despair in its beginnings are later subsumed by the wisdom and harmony of old age. But in this suite, if wisdom has an opposite, it’s not ignorance, but the sass of Uranus, the magician — smart-alecky and unpredictable. Uranus is a prankster, and in this movement we hear not only the evidence of tricks, but also of the prankster’s smug satisfaction in his own cleverness.

Has Holst been leading us outward in the solar system? Not in a strict astronomical sense, but perhaps in an aesthetic one—from the martial strains of Mars to Neptune, the mystic, whose very mystery conveys a sense of endless space. The musical materials here are not melodic themes so much as cryptic figures that play off each other, like intersecting rays of astronomical light. A wordless chorale of women’s voices shimmers, swelling from inaudibility to a veil of sound, then recedes into the stars. In the end, after our exuberant tour of the skies, we are left at the very edge of all that we know, looking out at a thrilling but unfathomable universe.