MARSALIS: Selections from A Fiddler’s Tale

It’s no exaggeration to call Wynton Marsalis American musical royalty. As an internationally acclaimed musician, composer and bandleader, an educator and a leading advocate of American culture, he has created and performed an expansive range of music — from quartets to big bands, chamber music ensembles to symphony orchestras and tap dance to ballet — always expanding the vocabulary for jazz and classical music with a vital body of work that places him among the world’s finest musicians and composers. 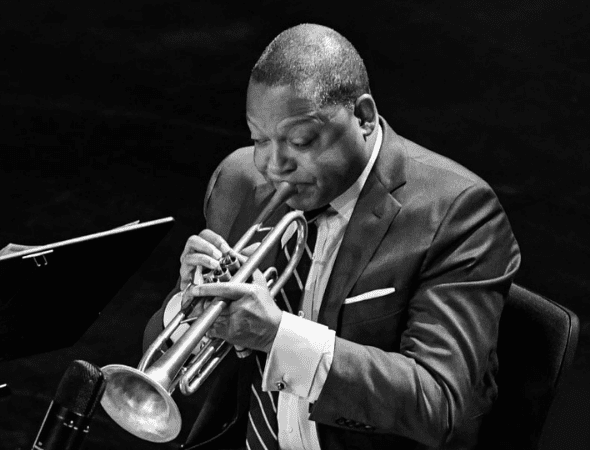 At age 17 Wynton became the youngest musician ever to be admitted to Tanglewood’s Berkshire Music Center. Despite his youth, he was awarded the school’s prestigious Harry Shapiro Award for outstanding brass student. Wynton moved to New York City to attend Juilliard in 1979. When he started gigging around the City, the grapevine began to buzz. The excitement around Wynton attracted the attention of Columbia Records executives who signed him to his first recording contract. In 1980 Wynton seized the opportunity to join the Jazz Messengers to study under master drummer and bandleader Art Blakey. It was from Blakey that Wynton acquired his concept for bandleading and for bringing intensity to each and every performance. In the years to follow Wynton performed with Sarah Vaughan, Dizzy Gillespie, Sweets Edison, Clark Terry, John Lewis, Sonny Rollins, Ron Carter, Herbie Hancock, Tony Williams and countless other jazz legends.

Always swinging, Marsalis blows his trumpet with a clear tone, a depth of emotion and a unique, virtuosic style derived from an encyclopedic range of trumpet techniques. When you hear Marsalis play, you’re hearing life being played out through music. And his vibrant stage manner and personal warmth are borne out in his compositions as well as his performances.

Marsalis’ core beliefs and foundation for living are based on the principals of jazz. He promotes individual creativity (improvisation), collective cooperation (swing), gratitude and good manners (sophistication), and faces adversity with persistent optimism (the blues). With his evolved humanity and through his selfless work, Marsalis has elevated the quality of human engagement for individuals, social networks and cultural institutions throughout the world.

Commissioned by the Chamber Music Society of Lincoln Center, A Fiddler’s Tale was created in collaboration with that organization and with Jazz at Lincoln Center. It is Marsalis’ response to Igor Stravinsky’s A Soldier’s Tale. As Marsalis notes on his website, it is composed from the perspective of later twentieth-century music (Stravinsky’s composition dates from 1918) “including but not limited to jazz.” Like Stravinsky’s work, A Fiddler’s Tale can be performed with or without narration. It premiered in 1998.